Capability Brown and the Corsham Eye Catcher by Robert Cox

Lancelot ‘Capability’ Brown was not known for his architecture but his landscapes changed the face of eighteenth century England to a world of serpentine lakes, moving hills, perfect ‘rides’ and eye catchers.

A magical world of Green.

Browns landscapes were of monumental scale and have been embedded in the English character by the paintings of Turner and the poetry of Wordsworth. In 2016 we celebrated his tercentenary and it has been estimated that Brown worked on over 170 British gardens including the magnificent parks at Blenheim, Chatsworth and Burley. It was these gardens along with many others that arguably made Brown the most famous English Landscape designer and one that continues to inspire today.

Section of a 1829 painting by J.M.W. Turner depicting the natural Brownian Landscape

In 1745 Paul Methuen acquired Corsham Court, an Elizabethan Manor house built in a typical 120’ x 30’ E shaped plan, and later commissioned Brown to extend the mansion and devise a landscaping proposal. As an advocate of the prevalent 18th Century Landscape Movement, Brown was concerned with creating pastoral settings through ‘naturalisation’ and thereby consolidated the precise ‘ornamental’ designs found in earlier generations.

At Corsham, Brown followed a similar tactic and separated the vast park from the pleasure ground via the introduction of his famous ‘ha-ha’ and integrated a ‘great walk’ interrupted by three architectural eye catchers.

Eye catchers such as folly’s, obelisk or gazebos featured highly in Browns landscape designs and it is understood that there purpose was to draw the eye across the undulating expanse of deer parks to the distant future. As explained this was no different at Corsham where Brown envisaged three architectural pieces a garden orangery, a pair of sitting lodges and a Bath House. As with many of Browns buildings these fell prey, often within a few years of construction, as their owners made room for the latest fashions.

Located on the West side of the North Avenue the Bath House was originally designed and built by Brown in the Recoco-Gothic style and originally overlooked the West end of a small lake. The pavilion consists of two floors with a sunken cold bath on the ground, a dressing room on the first and a tunnel to the rear, leading to a walled garden. Like many of Browns eye catchers the bath house was dramatically altered a few years after construction and in 1797 John Nash was introduced to the Methuens, through Humphry Repton (advocate of Browns work) to embellish the mansion so it reflected his picturesque style; the favourite of the Prince Regent.

During his appointment Nash took the opportunity to Gothicise the Bath house and remodelled the entrance by replacing the central ogee door openings with a larger Gothic porch. Fortunately Nash retained Browns door openings to the side and through this unusual ‘careful remodel’; a glimpse of the original form can be imagined. 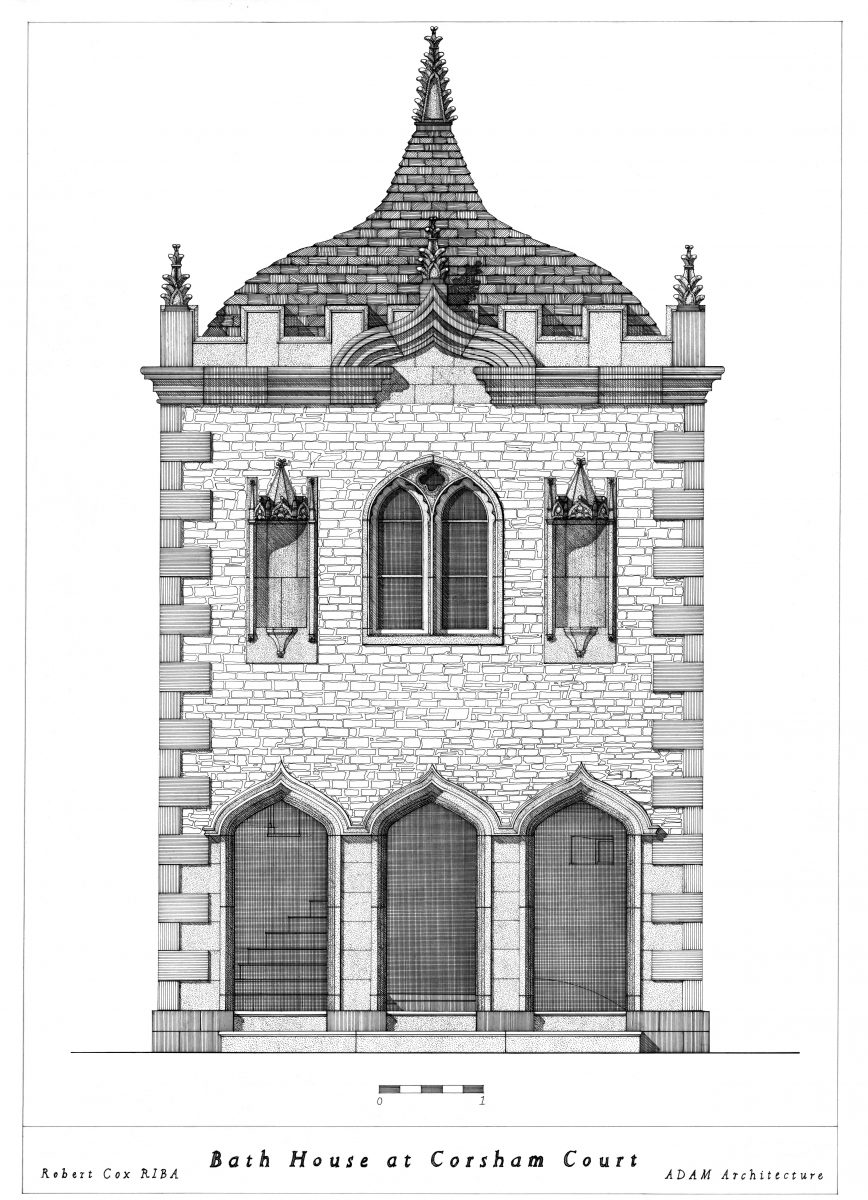 Original drawing by Robert Cox of the Bath House, including the niches and before the image was enlarged

As part of the 2016 ‘Capability Brown: Making the Landscape’ exhibition at Winchester Discovery Centre ADAM Architecture produced an eye catcher long with the help of landscape historian Dr. Kate Felus. It seemed fitting to use the Bath House at Corsham and recreate Browns original eye catcher through a hand drawn drawing that was mounted by traditional builders RW Armstrong.

The drawing that was enlarged from the original A2 version took centre piece at the ‘Capability’ Brown exhibition that closed at the end of May 2016. Drawn by hand using pen and ink on tracing paper, the building removes the Gothic Arches, recreated the ogee door openings, reduces the quantity of pinnacles and altered the glazing bar arrangement to a more Brownian style. Through this and along with the other exhibited items ‘Making the Landscape’ gave the public a glimpse into 18th Century England and what it would be like to commission arguably the most famous and influential British landscape designer.