Celebrating the 50th anniversary of the Civil Amenities Act of 1967, the London Society recently held a talk to remember the major landmark policy which was one of the first to spearhead efforts to designate and preserve England’s breadth of historic buildings and places.

Presentations came from four individuals from varying backgrounds - a Historic England commissioner, an architectural historian, an archaeologist and a conservation officer, each with their own thoughts and opinions on the state of conservation today.

Of course, there was the general conservationist viewpoint – we must preserve everything in the past! Respect the scale of context! Always preserve the setting and be ‘sympathetic’ to its character! These views were often subjective and not supported by any real substance as to why conservation areas are vital to our national and cultural identity. Most used subjective terms and described these areas as “beautiful” and “important”. 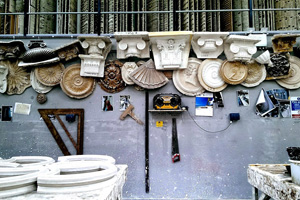 Naturally, we agree and have a love for historic buildings ourselves here at ADAM Architecture, but we could not help but think this was not a strong enough argument if we wanted to actually engage the wider public and push the architectural discourse.

Some others understood that good conservation could only be the product of good policy and a strong collaborative effort between the public (government) and private (professional bodies). This is to ensure a mutually beneficial compromise is achieved between the increasing demands for more housing/infrastructure hubs, and the need to preserve our cultural assets.

However, as architects and planners, we know this is not always so straightforward.

Often results are dependent on the small group of people who lead planning in each council. One speaker highlighted a current example in Ealing Broadway where the local council has seemingly turned a blind eye to conservation and opted to approve large-scale development projects for infrastructure and mixed-use structures. He continued to note that this development pattern in Ealing Broadway has continuously advanced with no sensitivity to the surrounding character of the once charming Broadway and has detrimentally impacted the historic assets within the Havend Conservation Area.

Another particular speaker directly criticised the current conservation process within planning and its associated policies, stating that they are both vague and overly verbose, with supplementary documents that are inevitably hard to find. He noted that the organisation and quality of conservation efforts vary between different councils and boroughs. The lack of consistency made conservation efforts less credible and made it more difficult for the public to support without a united front. He continued to criticise policy and bureaucracy for taking away the passion and focus from conservation. This made us question the current system. Perhaps the current ‘preservation’ system actually hinders our ability to effectively protect our conservation areas. Perhaps the process is overly difficult, achieving the opposite of what was initially intended and is, for example, de-incentivising developers to adapt and reuse the numerous derelict historic buildings in the UK.

In summary, the discussions seem to stem from two sides – 1) the acknowledgement of the growing pressure of development to support a growing population and 2) the need for planning to more productively direct and lead the conservation efforts under increasing threat from said development.

Some suggested the introduction of fringe conservation areas, or ‘buffer zones’, to ensure nearby developments are still protecting the setting of conservation areas. However, in places which are already facing the pressure of population growth, we feel this focuses too much on conservation and exacerbates the problem rather than reaching a solution in middle ground.

The looming questions that followed the discussions were, “Can we actually reach a compromise between modern demands and preserving the scale and buildings of the past?”, “Are conservation and planning officers equipped with the knowledge to properly defend and protect conservation areas whilst understanding the needs of the present and future?” and, “Is the current method of locking historically important areas and structures in the past the best method of engagement?”

Both of us can’t help but feel more confused and torn following the discussion, but the event was a thought-provoking experience nonetheless and a stimulus for future discussion.