Place making and the design of the architecture that contributes to the making of a place are creating something new and a vision for the future, both in the process of design and for the inhabitation of the place. But we should not let the idea of the future draw us into a fantasy of novelty, seduced by the idea that unavoidable change means that difference is the only way to be modern.

While we must make our plans for the future, in reality, we all dwell in the past; there is nothing else. The present is a fleeting moment and the future is not yet upon us. The future can only be imagined by what we take from the past. And the past is a memory; memory is all that that we have.

New places are never nowhere. Wherever they may be – an existing town, a new district or an entirely new place – unless it is in a never-inhabited wilderness, a place always has a human history and there is a culture with an identity. Places have memories and people have memories of places.

Places also have physical memories. Geology and the history of human activity will have left their mark. Designers are only making the next intervention in a series of interventions that go back in time and stretch into the future. We are responsible in our moment on the earth to adapt rather than destroy. We owe it to the memory of the past to give it continuity and leave its traces wherever we can in whatever is new. In this way, a new place belongs where it is. 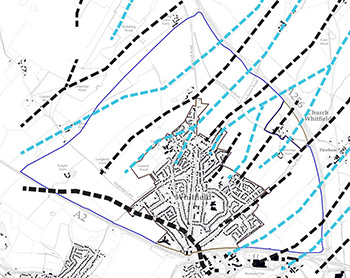 Landscape analysis for a masterplan, southern England, Duncan Thomas for ADAM Urbanism. Places have the physical memories of their geography.

New buildings and places will be the foundation of the common identity of the people who will live there. Designers are the servants of the new population, whether they know them or whether they are strangers. New places must become a home and the idea of home is not made out of nothing. It is in the memory of the people. New memories will be made but must belong to those of the place and people. Designers have a responsibility to unknown future inhabitants, displaced by choice or obligation.

The creation and control of memory through building is well-known. Nations, nation states and other organisations with authority use buildings and spaces to impose their dominant memory on the community. Monuments to monarchs, accessions, victories and eminent citizens establish the ceremonial memory of the nation. Buildings that house important activities represent the authority of those activities. Places of memory (Lieux de Memoire) where critical events took place can be identified, preserved and sanctified as monuments.

In the life of ordinary people, however, memories are usually small and everyday. These are less visible and often unarticulated but nonetheless are of great importance. The minor events, the small traditions and ceremonies, the places and buildings around them are shared and it is this collective memory that defines the community. Collective memory is more than common experience, it provides the structure for the formation of new memories and it is this structure and these memories that are taken to a new place.

A designers of new buildings and new places we have a duty to work with the collective memory of the community. Like the psychology of memory, recollection is never precise and is open to suggestion but is, nonetheless, based on a real past. Like the pathology of memory, without it we lose ourselves. 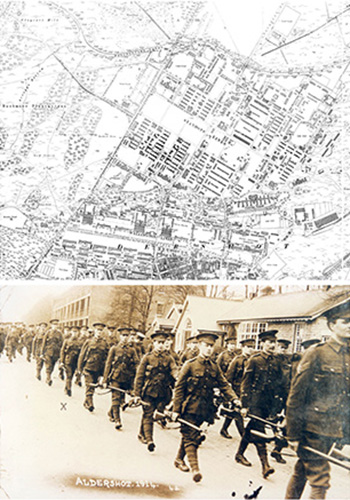 Historical study for the redevelopment of a former military barracks, England. Places carry the memory of their former inhabitants. 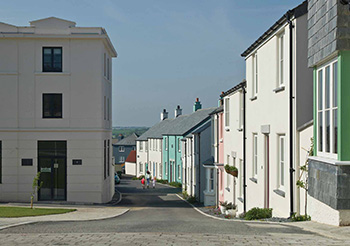 New urban extension, Cornwall, England, ADAM Urbanism. New places must be home to their residents and home is collective memory.