The expansion of Newquay is showing how new housing can be popular – www.conservativehome.com

Amidst all the frustration around proposals for unattractive new housing provoking inevitable opposition it is easy to be defeatist about the pressing political challenge of our time: getting far more homes built.

If there is hope it is to be found in Newquay in north Cornwall. Specifically in the extension of the town with the Nansledan development. Over 500 acres, it was conceived as an extension of around 1,000 homes – but now 4,000 homes are planned. As a “mixed development” it will also provide enough space for 4,000 jobs.

The Prince of Wales is responsible – the Duchy of Cornwall owns most of the land. Much attention has been given to his highly successful Poundbury the scheme in Dorset. But Nansledan is on course to be twice the size.

Create Streets has written a study of Nansledan and noted the confidence that Tregunnel Hill, a modest 10 acre development on the edge of Newquay, gave:

The local slate and stone gave it a distinctive Cornish feel. The popularity that resulted has encouraged Cornwall Council to be supportive of the more ambitious Nansledan plans.

“What is unmissable is that we’ve never had anyone say “this is not good quality.” In architectural terms, I am sure it will be criticised as “pastiche” but the fact is that most normal people say it’s nice. It’s hard to get away from the fact that they have created something that looks attractive. ‘It does feel like Cornwall. It says something about Cornwall.’ “

Those who buy property have to undertake some strict undertakings about not spoiling the appearance. One resident said:

“The Duchy has also supported a neighbouring community orchard social enterprise to expand, to plant hundreds of trees and will be supporting the creation of a restaurant selling food made with locally grown produce. Once Nansledan is finished, this community green space will be a key ‘bridge’ between the urban extension and the original town. Luke Berkeley, who runs the Newquay Community Orchard, explains: ‘The hope is to educate and persuade residents to plant edible plants so that the whole development can become much more sustainable and efficient…. We’ve been planting Cornish breeds of apple tree so that they can cope with the wind. It’s important that they do the same throughout Nansledan so that the trees can survive.’ “

Very Prince of Wales, isn’t it?

But what about the money? That is something that property developers focus on rather more than His Royal Highness.

Actually it sounds as though producing attractive homes that people want to live in can be rather lucrative:

“Homes in the Duchy’s other large urban extension, Poundbury, now sell at a 25 per cent premium to the local market. This has been used to permit a higher than typical proportion of affordable homes (around 35 per cent). Nansledan is much less advanced than Poundbury. So far only 5 per cent of the homes have been built and only about 37 per cent have received outline planning permission. We have not conducted a full price comparison. However, a series of simple comparisons of sales prices and conversations with agents would suggest the same pattern is repeating itself. Homes in Nansledan are already achieving a near 20 per cent price premium over other new builds on the outskirts of Newquay.”

It is early days. But responses from the first residents are very favourable. Here are some comments:

‘I like that all the houses look different. I prefer it to the other estates which look like Lego land. It looks like a village that has been built gradually. I like that there are different sizes so everyone has to live together. We’ve all got to live together. I think it’s brilliant. I like the colours. The sustainability drew me to it. I like that the shops are going to be independent. This creates more jobs. This is important to me. It can’t just be houses….

“I loved the idea of being part of something ‘new’.. of a community coming together. I know all my neighbours. They come in for a cup of tea. I’ve helped them out. They’ve helped me out. It’s been just wonderful….”

“The particular design combines the traditional building style with all the modern advantages. Here every house looks different. And these differences have been carefully thought about….I would say, you feel like you live here as an individual, not a number. That feels good….”

“We pretty much know all our neighbours….”

If this can succeed in Cornwall why not elsewhere? Commercial viability, community spirit, local pride, environmental sustainability and democratic accountability can all be maintained in property development. Beautiful, affordable new homes need not be a dream. Newquay is showing us the way. 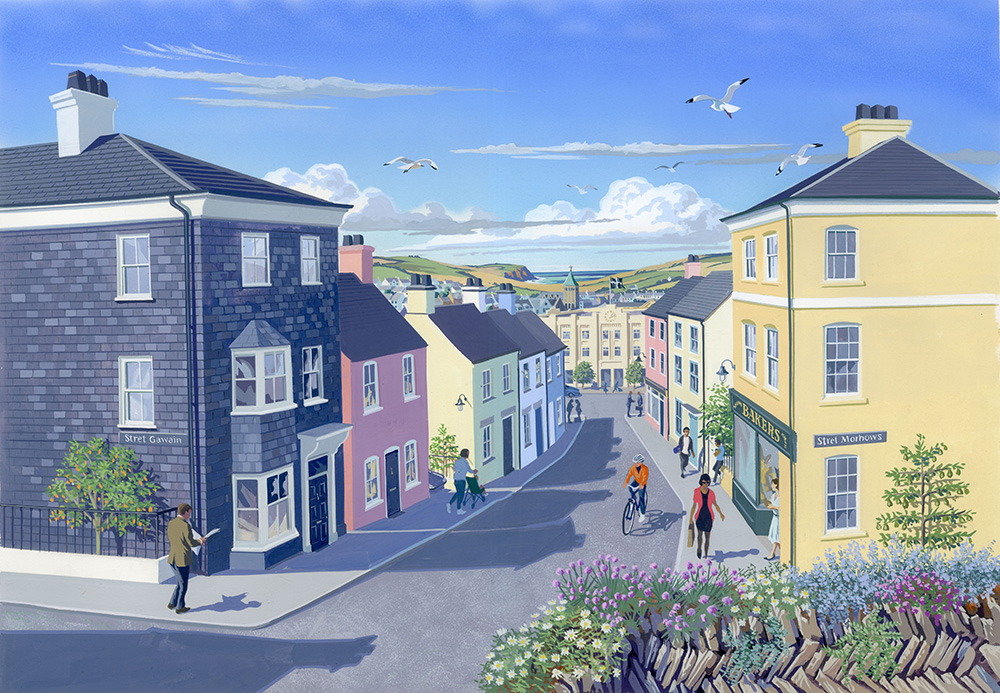