On 28th January 2019 George Saumarez Smith took part in The Negroni Talks – hosted by architects Fourthspace and sponsored by Campari – in the Venetian restaurant Ombra, London

This special event in the series hosted by New London Architecture and as part of their 'Factory-made Housing: a solution for London? series of events, addressed the role of factory methods in delivering London's homes. Is it really the future of housebuilding in the capital? Can we ensure design quality when delivering huge quantities? 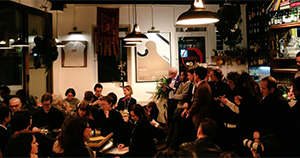 George spoke against factory-made housing:
"I am going to start by painting two pictures in your minds.

The first is of a small Cornish fishing village. It nestles around a harbour, with quaint cottages lining steep narrow streets, all painted in pastel colours. The buildings seem to have grown naturally out of the rocky landscape, built up over hundreds of years and yet all in harmony with one another.

At the centre of the village is a tiny church built of the local stone. Facing the harbour is a cluster of small buildings: a delicatessen, a post office, a small pub and a Michelin-starred fish restaurant. I am sure you can all picture the scene: it is what we might call ‘Instagram perfect’.

The second picture I want to paint for you is of a flat cliff top on the coast of Devon. Here a beautiful landscape has been scarred by a huge caravan park, with hundreds of mobile homes arranged in serried ranks. Far removed from its natural setting, this is a place with no sense of aesthetic design. The only person who might post this on Instagram is a professor from London Met who, stumbling upon it by accident, decides that it is an interesting and overlooked example of ‘genuine architecture’. To anyone else, however, it is simply an eyesore.

These two pictures, two extremes, are what you might have expected me, as a traditional architect, to present this evening as an argument against pre-fabrication. The first seems to carry with it a sense of timelessness, of permanence, of craft, of a connection to the natural world. And the other seems to embody everything that is most insensitive about mass-production, industry, and a general loss of beauty in the modern world.

And yet, life is never this simple. The little Cornish village can only survive because, at the top of the hill before you arrive there, is a 1970’s suburb with a school and a health centre and a recreation ground and a 7-11 newsagent and some low-cost housing and an enormous public car park.

The town itself is rather bleak in winter and massively overcrowded in the summer when it is invaded by families from London seeking an unspoilt idyll. Good luck trying to visit this rural paradise on a hot Saturday afternoon in August.

Meanwhile the caravan park never has any traffic problems, everyone can park right next to their home and it has an interrupted view of the sea all year round.

It just goes to show that it is very dangerous to look at things in too simplistic a way.

So what do I really think of factory-produced housing? Well for one thing, I am certainly not against new technology, as this has always shaped advances in the building industry.

I am not naive about the inefficiencies of traditional construction, and anything that reduces the amount of concrete we use has to be a good thing. Nor am I against off-site manufacture of certain parts of buildings; this has been normal practice for a very long time.

But tonight is a debate, so I do need to come down on one side or the other.

And so here goes, let me now paint you a third scene...

Picture in your minds a piece of land on the outskirts of a large town, sandwiched between a 1980’s housing estate and a motorway. Ten years ago this land was allocated for a development of 3000 houses. It has been purchased by one of the major PLC housebuilders and construction is now well under way.

First impressions are not good. You enter this new place from a roundabout off a dual carriageway. The buildings are set back leaving a strip of scruffy land, too small to play football on but too large for anyone to bother looking after.

The houses are all built in an artificial-looking red brick with bright orange tiled roofs. They have been crammed together apparently in attempt to get as many houses as possible onto the site whilst ensuring that no two buildings ever actually touch one another.

Every house is two storeys high, and there are only a small number of different types - perhaps 5 in total - and yet none of them look quite right, appearing squashed and awkwardly proportioned. There are only houses - no shops or businesses, no public facilities, no town centre, only houses: wave after wave of them, all virtually the same.

And in case anyone should question how this happened, it is exactly what the planning system is set up to deliver. It has been signed by everyone: the highways team, the Council’s ecologist, the drainage consultant, the inspector from the NHBC; every box has been ticked. And yet, it is a place completely devoid of any character or quality.

I’ve not mentioned where this place is, because it could in fact be anywhere in Britain. But, and here is where you might all be surprised, this particular site is in fact a pioneering development that could change the face of housing in the UK in the future. For, despite appearances, every one of these houses has been built entirely off-site in a factory.

As we look more closely, things begin to make sense. The awkward proportions are the result of an extensive process of adjustment in the sizes of each modular piece so that they can be fitted on the back of a lorry. The bricks are not bricks at all but thin slips applied to the face of each house. Behind plastic rainwater pipes are movement joint strips where the different modules have been bolted together. And perhaps most of all, we now realise that the level of repetition has been essential in order to compensate for the huge up-front investment required to set up a factory in the first place.

There are perhaps a couple of advantages of pre-fabrication. The internal finish in each house, controlled in a factory environment, is better than normal - although it has robbed the local economy of traditional trades such as bricklaying, carpentry and plastering that would otherwise have been carried out by local people.

And one might say that the houses have been built quickly, but to be honest, it is not that quick. When you consider the amount of time involved in promoting the land, securing allocation, going through an extensive planning process, signing off lengthy legal agreements, refining the production process, the design of individual house types, and the eventual period of construction, it is not exactly speedy. Regency Cheltenham was built much more quickly than this, 200 years later it is seen as a model of good urbanism, and every house there is now a listed building.

Perhaps you are all thinking, things are different in London.

The problem is that for factory-made housing to work in the UK, it needs to be able to work everywhere: the economics only stack up if it involves a high volume and a high degree of repetition.

We are not talking, therefore, about small boutique sites next to a canal in East London where it might be worth a relatively low-risk experiment and which relies on over-inflated property values to make it viable. What we are talking about is mass housing and what happens when you are only interested in speed of delivery and volume, is that quality goes completely out of the window.

If architects in the audience are thinking, we can find ways around this by cladding the units on site in a different material, then you are mistaken. All you have done is to waste all the advantages of off-site manufacture by introducing a hybrid system that becomes more complicated than traditional construction.

And so to conclude: is off-site manufacture the way forward? I would say that it rather depends on what you are after. If you are happy with architects having less influence on design, of accepting greater compromise, of more repetition, and lowest-common-denominator could-be-anywhere house types, then factory housing has a lot to offer.

But is this what we want? Design standards in the housebuilding industry are already low; do we really want to make them even lower? What sort of a legacy will this leave for future generations?

And so to one last point. I have been talking entirely about buildings, but what happens over time, of course, is that they become home to communities. Whether it is the Cornish fishing village or the clifftop caravan park, communities rely on social interaction and robust infrastructure. Poorly-designed or poorly-built housing creates a big problem for the future, as sooner or later those communities are faced with the upheaval of mending or rebuilding their broken homes. We have seen too much of this from the pre-fab estates built in the 1950’s and 60’s; it is time that we took better care of our communities and built with longer term goals in mind.

It is a huge challenge, but factory-produced housing is not the answer.