The Manor Reborn – The World of Interiors

Over the years Chettle in Dorset has suffered indignity after indignity, having been devastated by damp and death duties, divided into flats - and at one time even serving as a grain store. But now, exquisitely repaired and restored, this Baroque masterpiece looks in fine fettle once more thanks to the new owners, Tom and Rosamond Sweet-Escott. They tell Ruth Guilding how their decorator, Ben Pentreath made their lives 'a complete joy' .. 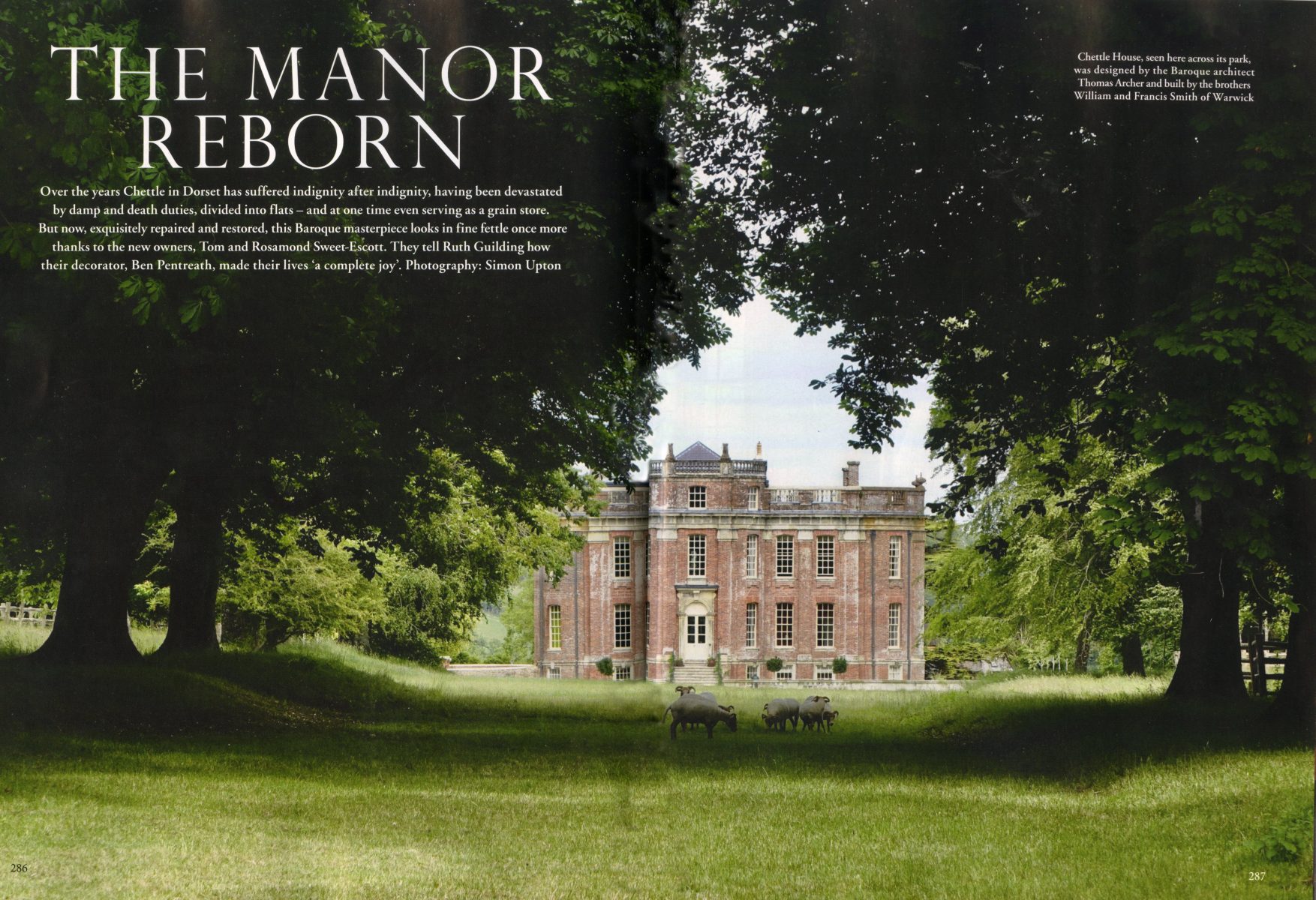 Chettle House, seen here across its park, was designed by the Baroque architect Thomas Archer and built by the brothers William and Francis Smith of Warwick 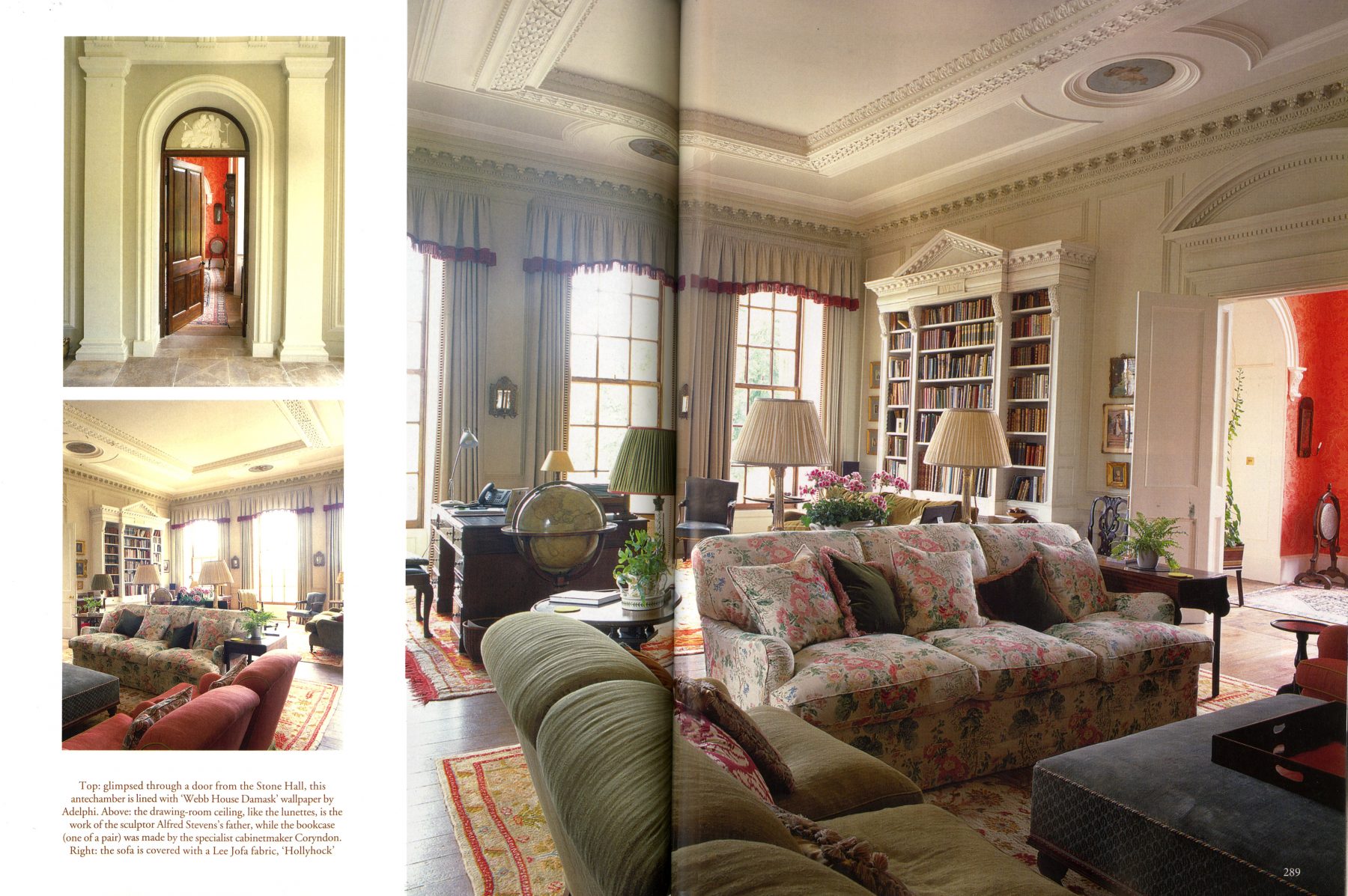 Top: glimpsed through a door from the Stone Hall, this antechamber is lined with 'Webb House Damask' wallpaper by Adelphi. Above: the drawing-room ceiling, like the lunettes, is the work of the sculptor Alfred Stevens's father, while the bookcase (one of a pair) was made by the specialist cabinetmaker Coryndon. Right: the sofa is covered with a Lee Jofa fabric, 'Hollyhock' 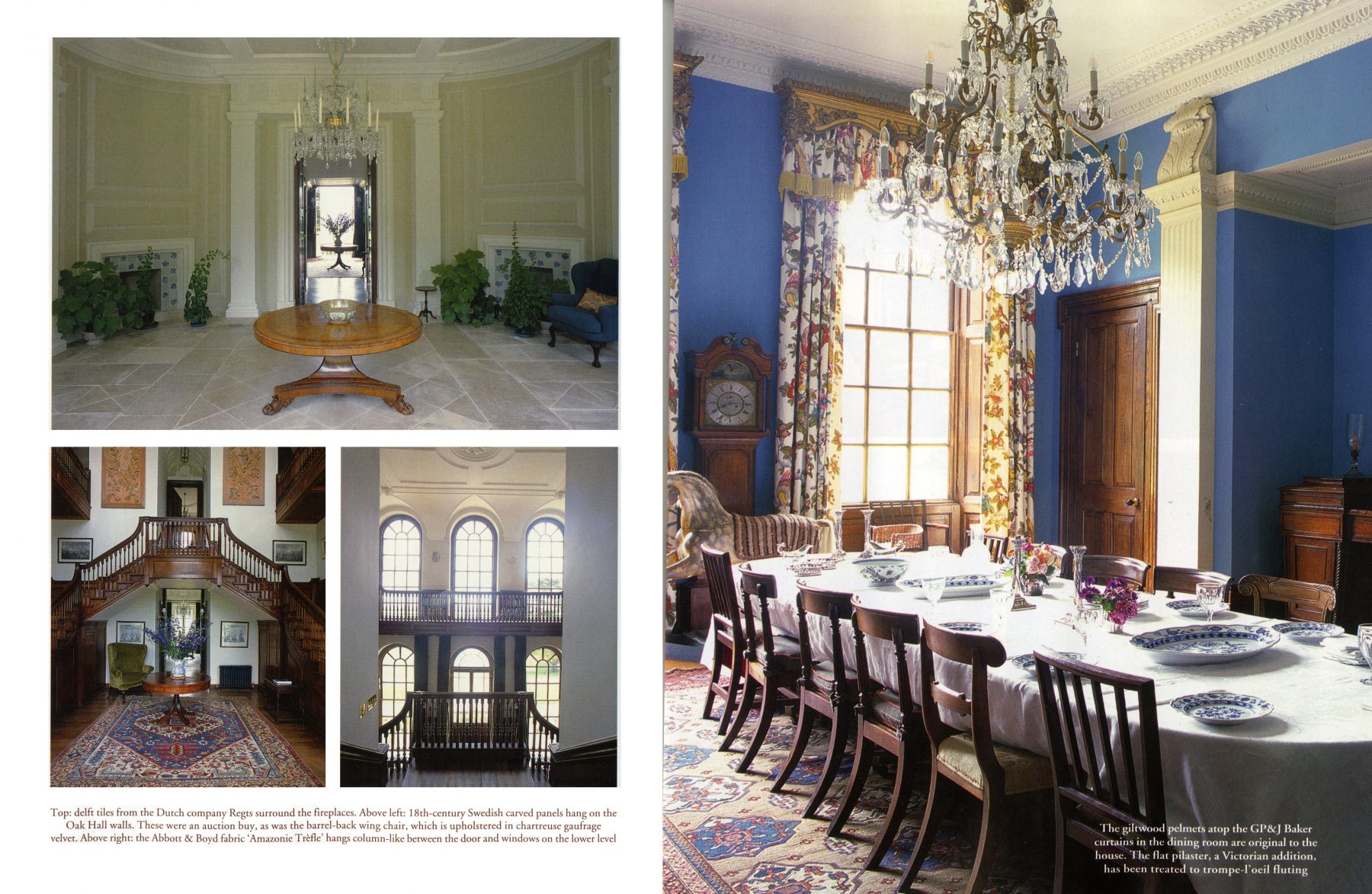 Top: delft tiles from the Dutch company Reges surround the fireplaces. Above left: l8th-century Swedish carved panels hang on the Oak Hall walls. These were an auction buy, as was the barrel-back wing chair, which is upholstered in chartreuse gaufrage velvet. Above right: the Abbott & Boyd fabric 'Amazonie Trefle' hangs column-like between the door and windows on the lower level.

The giltwood pelmets atop the GP&J Baker curtains in the dining room arc original to the house. The flat pilaster, a Victorian addition, has been treated to trompe-l'oeil fluting. 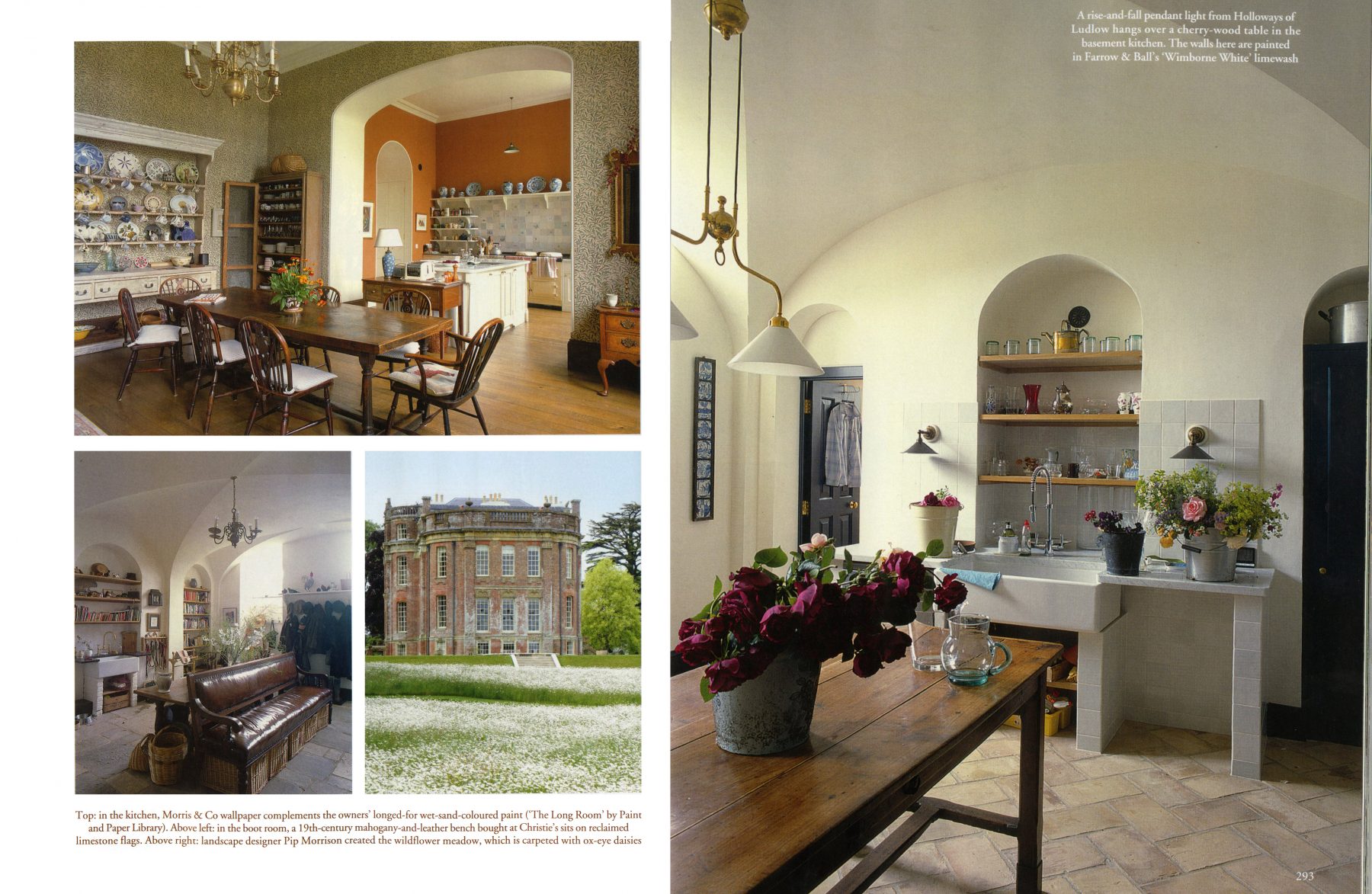 Top: in the kitchen, Morris & Co wallpaper complements the owners’ longed-for-wet-sand-coloured-paint (“The Long Room” by Paint and Paper Library). Above left: in the boot room, a 19th-century mahogany-and-leather bench bought at Christie’s sits on reclaimed limestone flags. Above right: landscape designer Pip Morrison created the wildflower meadow, which is carpeted with ox-eye daisies.

A rise-and-fall pendant light from Holloways of Ludlow hangs over a cherry-wood table in the basement kitchen. The walls here are painted in Farrow & Ball’s “Wimborne White” limewash. 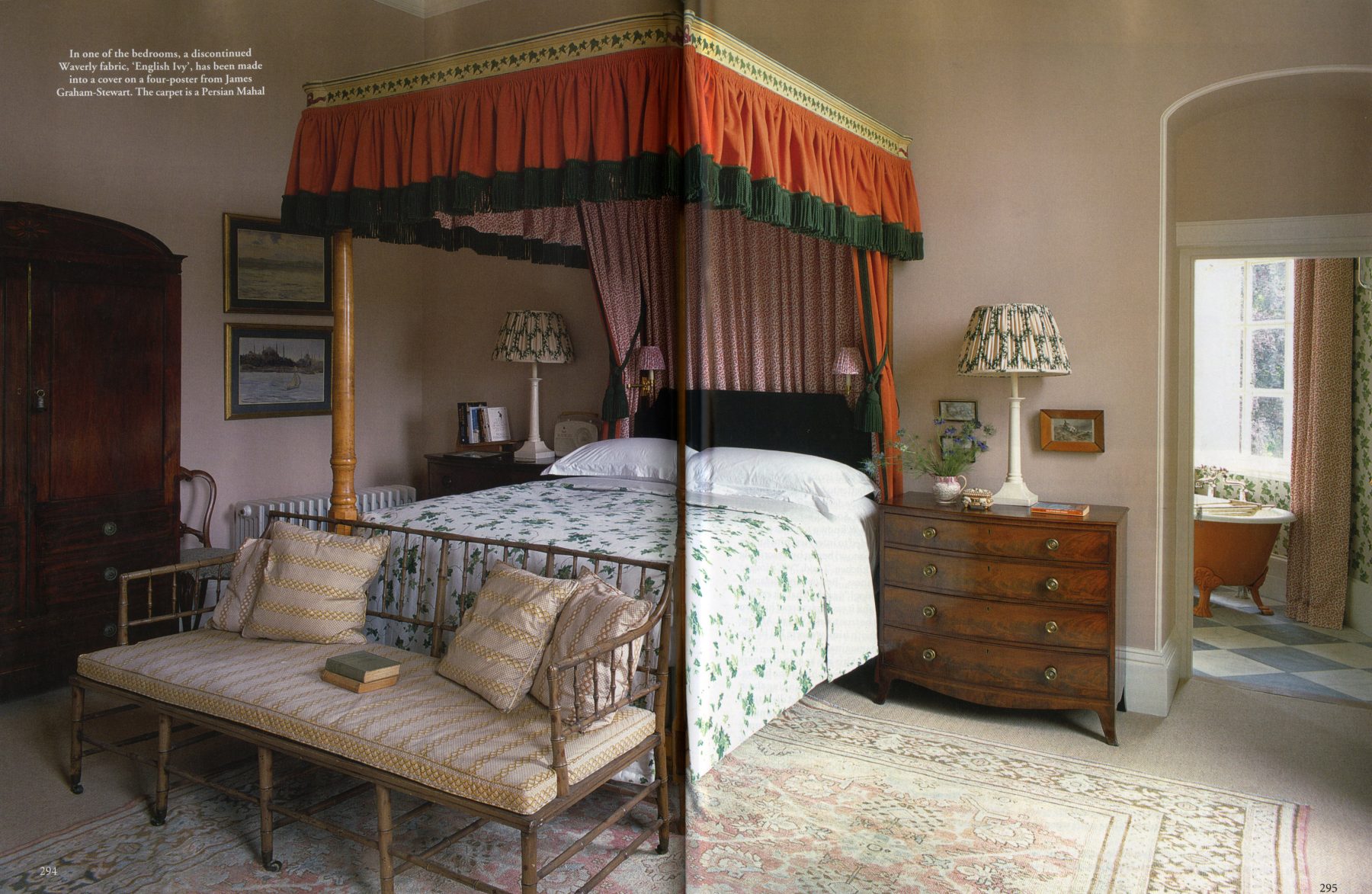 In one of the bedrooms, a discontinued Waverly fabric, ‘English Ivy’, has been made into a cover on a four poster from James Graham-Stewart. The carpet is a Persian Mahal

Chettle House was once spoken of as the masterpiece of the fascinating-sounding Bastard brothers of Blandford Forum. Now the Bastards have been deposed, and Chettle is instead hailed as one of the finest, most sophisticated and perfectly sculptural country houses of that most inventive gentleman architect of the Baroque period, Thomas Archer.

This all makes perfect sense. Of red brick and pale ashlar stone, Chettle crouches, grandstand-like, on its apron of verdure with long views out over terraces and down runways of greensward. It was built for the Ranger of Cran borne Chase, George Chafin, in cl 711-18, but a wastrel son gambled away all the family wealth on his 21st birthday. By 1846, when it was acquired by local solicitor Edward Castleman, Chettle was a ruin used for storing grain, sans floors, ceilings or fireplaces. Its fortunes rose but then gradually declined again, ending with its subdivision in the 1950s to make half a dozen residential flats. Now it belongs to Tom and Rosamond Sweet Escott, the longed-for grail of their five-year quest for a home to return to in the county. Latterly they had been living in Winchester, but both were born in Dorset. Tom had said: 'I've got one more project in me - I want to go home.' They had begun looking for a manor house with land or an estate where they could start a nature conservation scheme.

Briefly, they thought they had lost this dream of a house when someone else captured it from beneath their noses, but then Chettle came back to them like a gift when that buyer had second thoughts and sold it on. They engaged their friend the architect Hugh Petter to oversee its restoration while another friend, landscape designer Pip Morrison, had already become involved here. So, too, was an architectural and interior designer not yet known to them named Ben Pentreath. When they decided to interview him for the job of decorating Chettle, Rosamond began by describing her mother's wonderful orange kitchen. 'I said: "We'd love to get that, we love colour and richness ." Ben opened his laptop and said, "What, this kind of thing?" I said: "That's it exactly - a kind of wet-sand orange," and it was a picture of his own kitchen!' We told him we must be true to who we are. And we just felt terribly comfortable with him, we were led by the hand; it's been the easiest run imaginable.'

Ben says that he finds most of his job as a decorator is spent working for people who have never hired one before, and that 'My role is to tease out what they're thinking about their own house and sometimes to push them in directions they didn't know about.' When Chettle's graceful rooms became a laboratory for their collaborative efforts, its once rather chilly dining room was brought alive with Farrow & Ball's banging 'St Giles Blue', a departure for Tom and Rosamond. They'd seen the colour but didn't think they were brave or dynamic enough for it. Then, in his office, they spotted a sample length of the gaudy-bright GP&J Baker archive pattern linen that now curtains it. Other aspects of the new decoration mirrored what they already knew and liked, and Ben found places for much of their existing furniture. 'The drawing room is more like our old drawing room, split up into two parts, the cosy bit and the more formal one,' says Rosamond, 'and in our old kitchen we also had the wood burner with acouple of chairs, the eating area and the cooking area.' She was nervous at first about using William Morris wallpaper there - 'I'd had it in the 70s' - but Ben assured her that 'it's a big room and it can take it'. From her maternal grandmother (who married a Watney of the brewing dynasty) Rosamond had inherited the collection of old delft china ranged above the Aga. Ben found the long kitchen dresser that holds pottery models made by her children at prep school and other pieces and souvenirs with some special meaning or significance that she is continually adding. 'Ben introduced us to the mochaware. I said: "I don't want to go and buy a set of china that looks good up there, I want it to be what we use on a daily basis."'

A pair of finely carved Swedish limewood panels on the main staircase were spotted at auction by Tom, who asked: 'Where can these go?' Emblematic of the sympathy between decorator and client at Chettle is a little red wood-burning stove in Rosamond's study. When Sotheby's sold the contents of the Dowager Duchess of Devonshire's Old Vicarage on the Chatsworth Estate (Wo!March 2016), she saw its twin in the catalogue's photograph of the sitting room there and asked: 'Please can I have one of those? And this was the very last one. Harry Pelly-who saw to all the details of the decorating here - had to chase all over the country and he eventually tracked it down to a showroom somewhere.'

During the slumps of the early 20th century, and then when punitive death duties were imposed on the estate in the 1950s, a few bad things had happened to this house. The stone dressings and balustrades had been rebuilt in cement that crumbled, while the division of its graceful spaces and enfilades into flats and the closing up of its cellar and raising of the basements with a metre of cement had produced disastrous levels of damp. Once Chettle's Grade I-listed structure and interiors had been repaired and restored, Ben's architectural designer, Rupert Cunningham, oversaw work on the new joinery, plasterwork and detailing throughout its rooms. Now that they are in full possession and the wild meadow outside is alive with bees and there are vegetables from the kitchen garden on the table, Rosamond and Tom are conscious of both the duty and the gift that has been passed on to them here. 'Just ten years ago the people in this house owned everything here, its land, cottages and estate,' she says. 'Now we have this house with 240 acres and four cottages. But Tom's not grand. What he loves best is the house, the land. The rents are kept low here and so we are still this old-fashioned village. Now we know the people, we love it here and we help each other. We've never done this before, we've always done our own houses,' she continues. 'But Ben has been phenomenal. He's made our lives a complete joy' 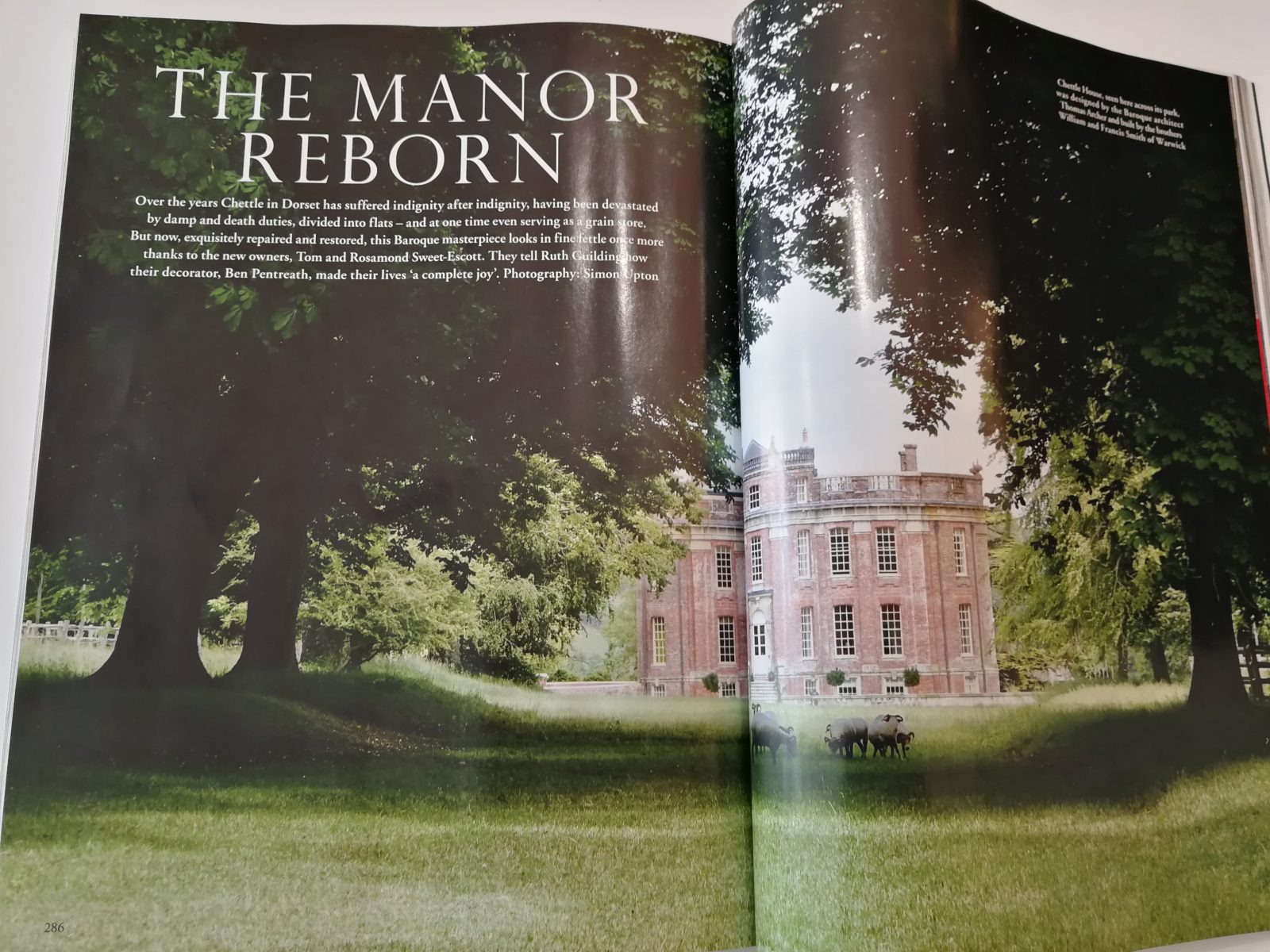