The Dower House in Derbyshire is home to William and Griselda Kerr. In 2013 they decided to embark on a programme of the restoration and make a number of alterations to the house that would improve the layout and use of space. They were happy to give their son, ADAM director Robbie Kerr the opportunity to transform and improve their home. 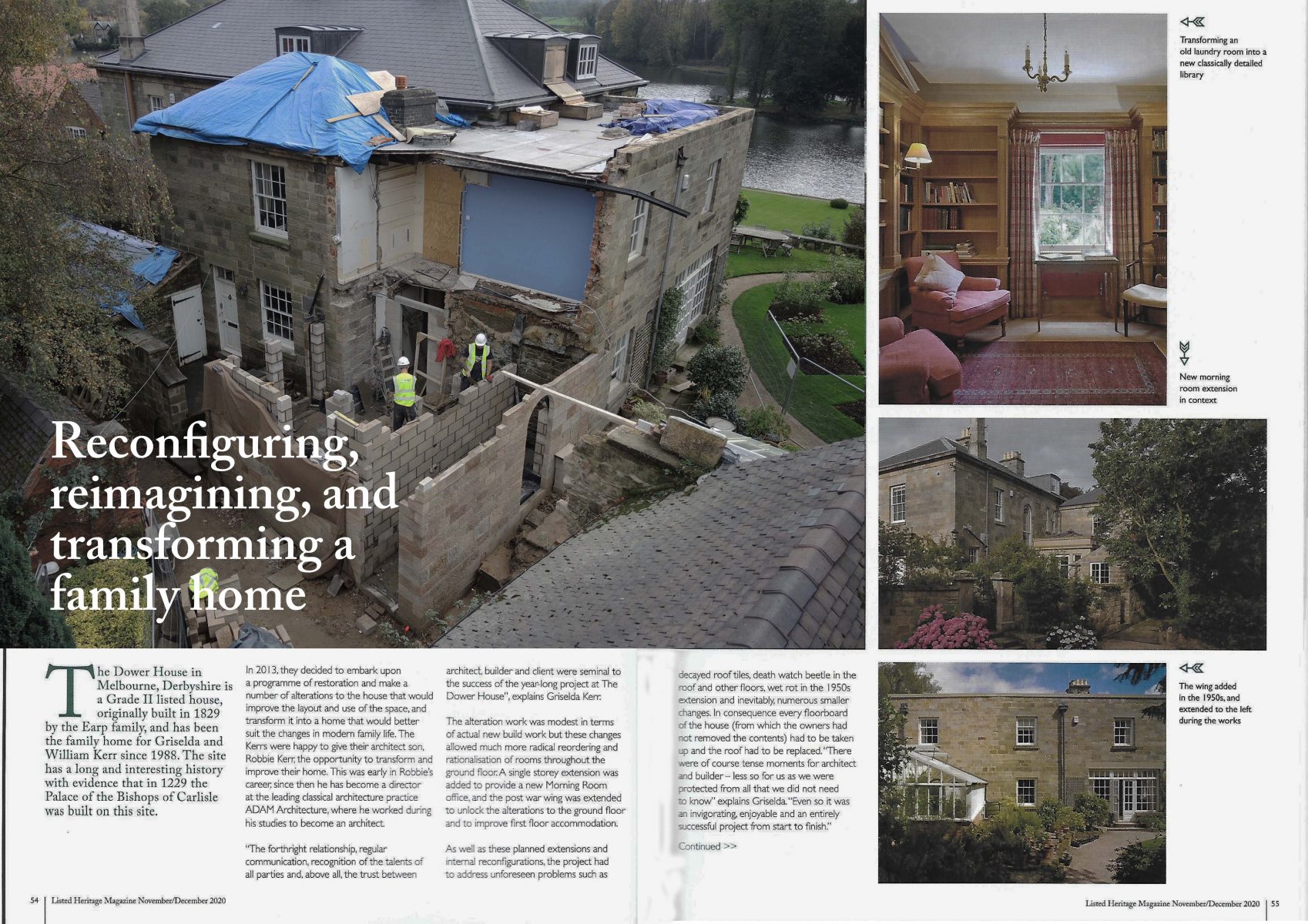 The Dower House in Melbourne, Derbyshire is a Grade II listed house, originally built in 1829 by the Earp family, and has been the family home for Griselda and William Kerr since 1988. The site has a long and interesting history with evidence that in 1229 the Palace of the Bishops of Carlisle was built on this site.

In 20 I 3, they decided to embark upon a programme of restoration and make a number of alterations to the house that would improve the layout and use of the space, and transform it into a home that would better suit the changes in modern family life. The Kerrs were happy to give their architect son, Robbie Kerr; the opportunity to transform and improve their home. This was early in Robbie's career; since then he has become a director at the leading classical architecture practice ADAM Architecture, where he worked during his studies to become an architect.

"The forthright relationship, regular communication, recognition of the talents of all parties and, above all, the trust between architect, builder and client were seminal to the success of the year-long project at The Dower House", explains Griselda Kerr. The alteration work was modest in terms of actual new build work but these changes allowed much more radical reordering and rationalisation of rooms throughout the ground floor.

A single storey extension was added to provide a new Morning Room office. and the post war wing was extended to unlock the alterations to the ground floor and to improve first floor accommodation. As well as these planned extensions and internal reconfigurations, the project had to address unforeseen problems such as decayed roof tiles, death watch beetle in the roof and other floors, wet rot in the 1950s extension and inevitably, numerous smaller changes. In consequence every floorboard of the house (from which the owners had not removed the contents) had to be taken up and the roof had to be replaced.

"There were of course tense moments for architect and builder - less so for us as we were protected from all that we did not need to know" explains Griselda. "Even so it was invigorating, enjoyable and an entirely successful project from start to finish." 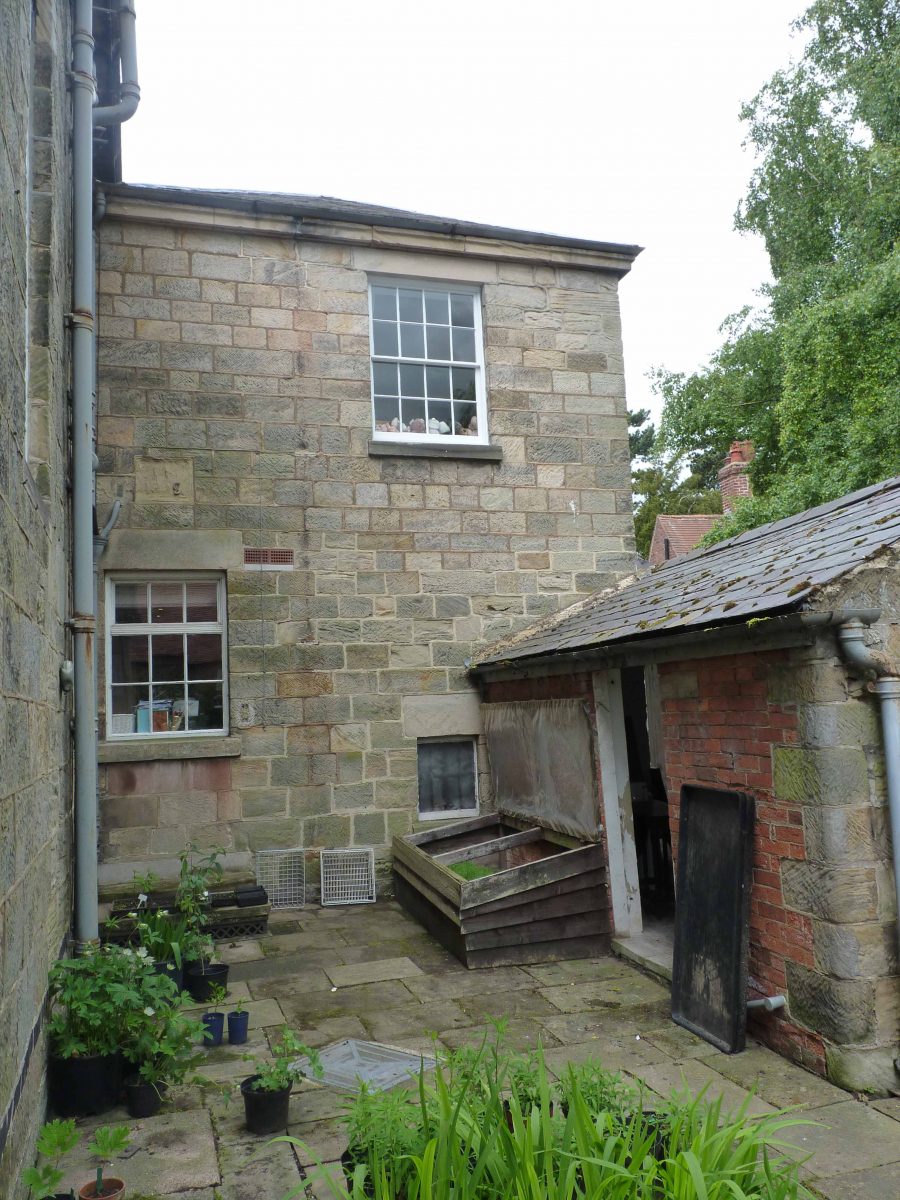 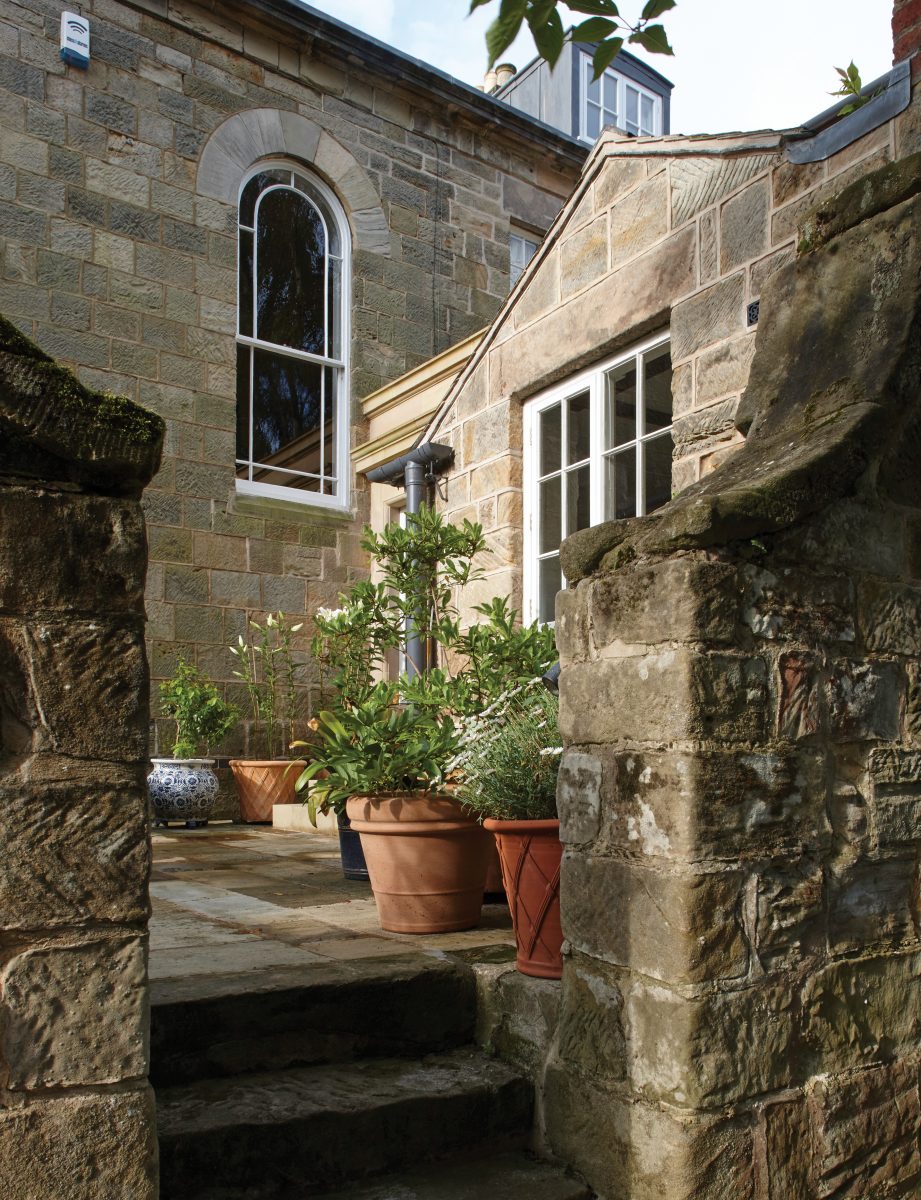 Above: The East courtyard before and after the works

A redundant coal storage area in the 1950s wing was integrated into the extension which allowed a series of subsequent moves to rationalise and reorganise the ground floor, providing a new larder, a larger laundry room, a new entrance for those wearing wellingtons or gardening boots, and in the place of the old laundry a new library was created. Above, the addition of a new bedroom and en-suite bathroom transformed the attic space.

Describing the considerations when designing the alteration work, Robbie explains, ''The position of the new single storey Morning Room extension was carefully thought out so as to limit the height of the building and contain it carefully within the existing courtyard. The existing window opening was lowered and the shutters retained and reinstated to form a door between the old breakfast room and new morning room, creating the opportunity for two interlinked offices for the clients. The overall design utilises existing materials and the restrained classical details found on the house to ensure it ties in sensitively with the property." 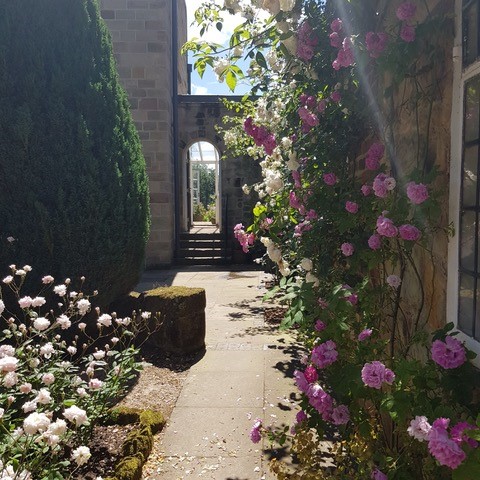 Above: A new arched opening creating a new link around the house, linking the gardens together

The double storey extension, originally finished in concrete render was re-built in a local sandstone, tooled to match the distinctive existing original pattern. The random width coursing followed the new work carefully to blend with the existing stonework to the house. 'Today the effects of weathering is already blurring the line of new and old in a most wonderful manner a tribute to the fantastic builders involved with the project," says Robbie. There were various factors that Griselda and William Kerr describe as being essential to the success of this project There was a clearly defined chain of command: Client to architect to builder. This was adhered to (almost) relentlessly so that the parameters of the project were never blurred. The architect was known to override the client once or twice where a breach of planning permissions might otherwise have been occasioned. A fortnightly site visit of the architect enabled him to inspect and sign off stages of the work and resolve any problems whilst keeping timelines in focus. Having the architect manage the project rather than have the client or an agent manage the project as a middleman, kept efficient and organised lines of communication. The architect was always accessible to the builder in person or by telephone.

Client accessibility was also important. With the client on site, efficient implementation of the programme was possible, for example when a gas main was to be laid through a flourishing vegetable garden its best route could be orchestrated, the dismantling of the greenhouse could be undertaken with minimal disruption to the gardening year, and as furniture and clothing were cleared from one room to another it was sensitively undertaken as team work. (The clients moved into an adjacent cottage only when the cold in the house became intolerable.)

The builder Alan Staley Building Contractors, had a talented and homogenous team working for him. Wholeheartedly committed to the project, he was involved in all aspects and continuously present on sit e. There was camaraderie and discipline amongst his team with no radios or tea drinking on site and bad language being a sackable offence, a strong respect was built between the team of builders and the client. A mutual respect between architect and builder developed from the initial good clear instructions: even so, as a craftsman as well as an architect, the architect was able to appreciate the solutions put forward to the challenges posed by his own design. This high level of craftsmanship and attention to detail, combined with his passion and enthusiasm to retain and preserve the historic fabric whilst making additions to the property that complemented the existing detail, added to this respect. The architect's positive feedback to those working on the project, skilled or unskilled, greatly boosted morale on site. 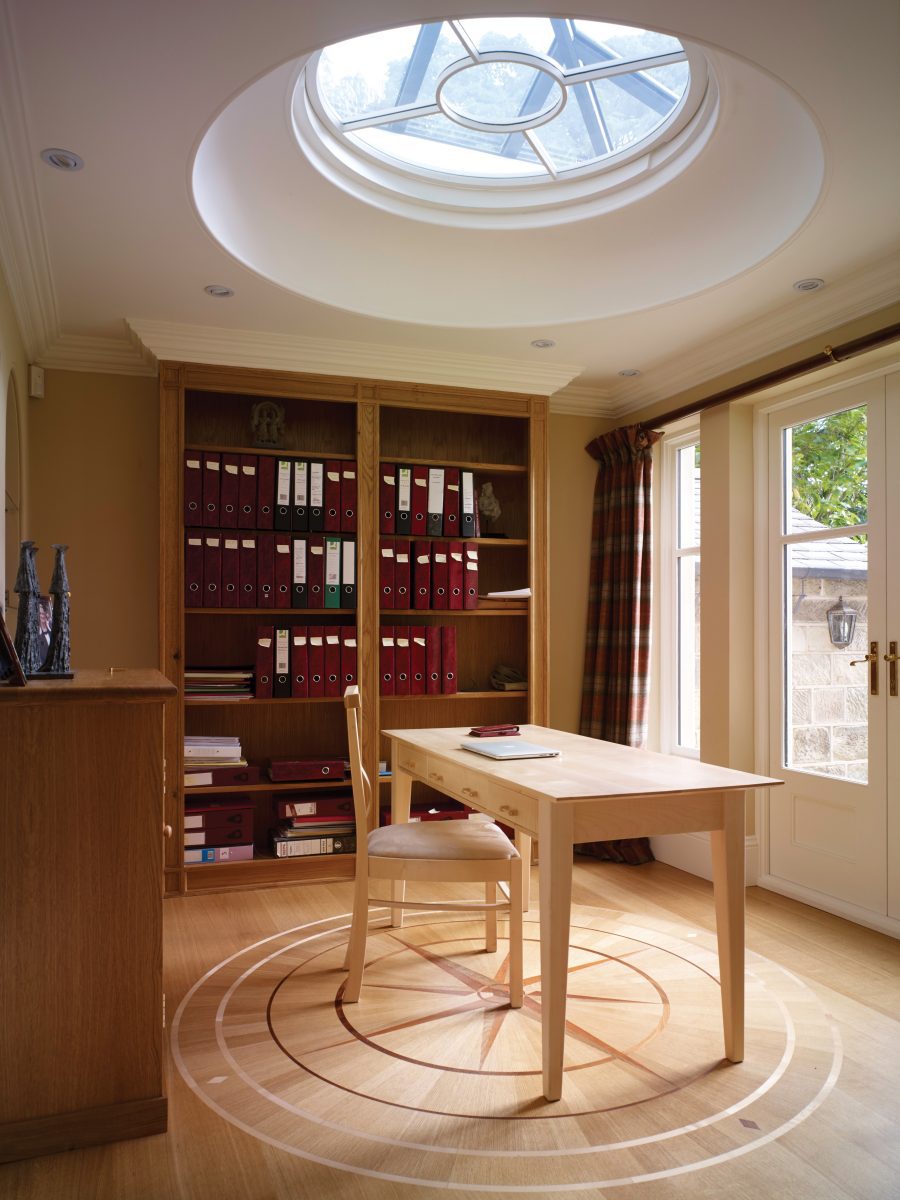 In summary, Griselda explains, "As a result of these factors described, the relationship between the architect, builder, and us as client was, from the earliest discussions to the final party given for all those working on the project, a totally constructive and happy one." The interior architecture and joinery were also designed by Robbie, including the new fireplace in the hall, the library, laundry and Morning Room, all bespoke design that transforms the new rooms. Working with Interior Designer.Vanessa Church from Church & Rose, on colours and materials.

Click here to download a pdf of the article in Listed Heritage, the magazine for the Listed Property Owners Club.