A question of style – by Eleanor Doughty for Country Life

When building a new house, the biggest choice is between classic and contemporary. Eleanor Doughty talks to the owners of newly built houses and find that the answer lies in combining the best of both

A FEW miles outside Macclesfield is Henbury Hall. Based on Palladio's Villa Capra, 'La Rotonda' ('Variations on perfection', May 19), it is a neo-Classical feat of modern architecture. It was the brainchild of the designer Felix Kelly, his client, businessman Sebastian de Ferranti, and the Classical architect Julian Bicknell. Completed in 1986, it represents the extreme of a conundrum faced by those planning to build a house: does one go for a traditional style or a more modern look?

Whatever the direction, it doesn't have to be about extremes. Architect-turned-landscape designer Anna Spruit would be the first to admit that this dilemma wasn't an issue when she began planning a house in West Sussex. 'I wanted it to be modern because I am an architect-I wouldn't have considered building anything else,' she says. 'I did a Pinterest board of what I wanted, and half of the images were from [Putney practice] McLean Quinlan, so we got them on board.' 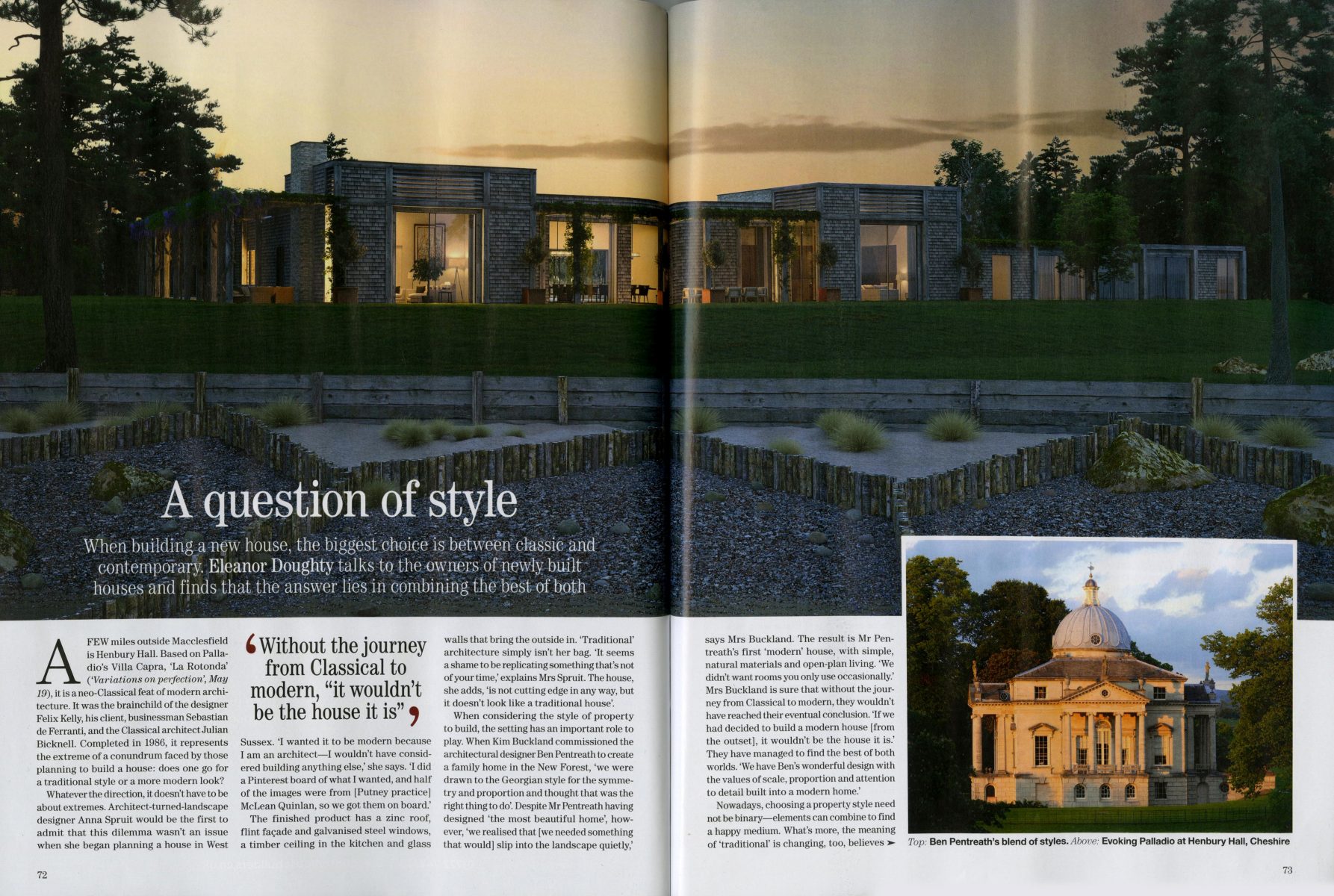 The finished product has a zinc roof, flint façade and galvanised steel windows, a timber ceiling in the kitchen and glass walls that bring the outside in. 'Traditional' architecture simply isn't her bag. 'It seems a shame to be replicating something that's not of your time,' explains Mrs Spruit. The house, she adds, 'is not cutting edge in any way, but it doesn't look like a traditional house'.

When considering the style of property to build, the setting has an important role to play. When Kim Buckland commissioned the architectural designer Ben Pentreath to create a family home in the New Forest, 'we were drawn to the Georgian style for the symmetry and proportion and thought that was the right thing to do'. Despite Mr Pentreath having designed 'the most beautiful home', however, 'we realised that [we needed something that would] slip into the landscape quietly,' says Mrs Buckland. The result is Mr Pentreath's first 'modern' house, with simple, natural materials and open-plan living. 'We didn't want rooms you only use occasionally’. 'Mrs Buckland is sure that without the journey from Classical to modern, they wouldn't have reached their eventual conclusion. 'If we had decided to build a modern house [from the outset], it wouldn't be the house it is.' They have managed to find the best of both worlds. 'We have Ben's wonderful design with the values of scale, proportion and attention to detail built into a modern home.'

Nowadays, choosing a property style need not be binary-elements can combine to find a happy medium. What's more, the meaning of 'traditional' is changing, too, believes Ross Sharpe, a director at Yiangou Architects. 'People accept that you can create period-style houses with an Elizabethan feeling rather than Georgian-and they understand Lutyens more now. The dream, he adds, especially in his Cirencester locale, is still 'the five-bay doll's house with sash windows. Trying to sway people away from that is tricky'.

In Northamptonshire, two of Adam Architecture director Robbie Kerr's clients have been duly swayed. Ancestors of the Dukes of Buccleuch have had an estate at Boughton since 1683, but, lately, the family has lived in Scotland. This is what the present Duke's younger son Lord Charlie Scott and his wife, Flora, plan to change when their new house in Boughton's Grade II-listed park is complete (subject to planning). Boughton itself has been instructive to Mr Kerr's design: 'For us to build anything that would detract from Boughton, whether in a local vernacular or a modern aesthetic, wouldn't be allowed,' says Lord Charlie. Drawn to Georgian properties, they looked around local rectories for years trying to find a house, 'but felt that these houses had so much wasted space,' explains Lady Charlie. The seven-bedroom, C-shape house Mr Kerr has designed has one open-plan wing, and another traditional one, with ‘"grown-up" rooms – a sitting room, drawing room, and library'. Upstairs, the bedrooms are modest. 'For a house party, I would rather bunk up the kids than have a couple of grand spare rooms’, explains Lady Charlie. 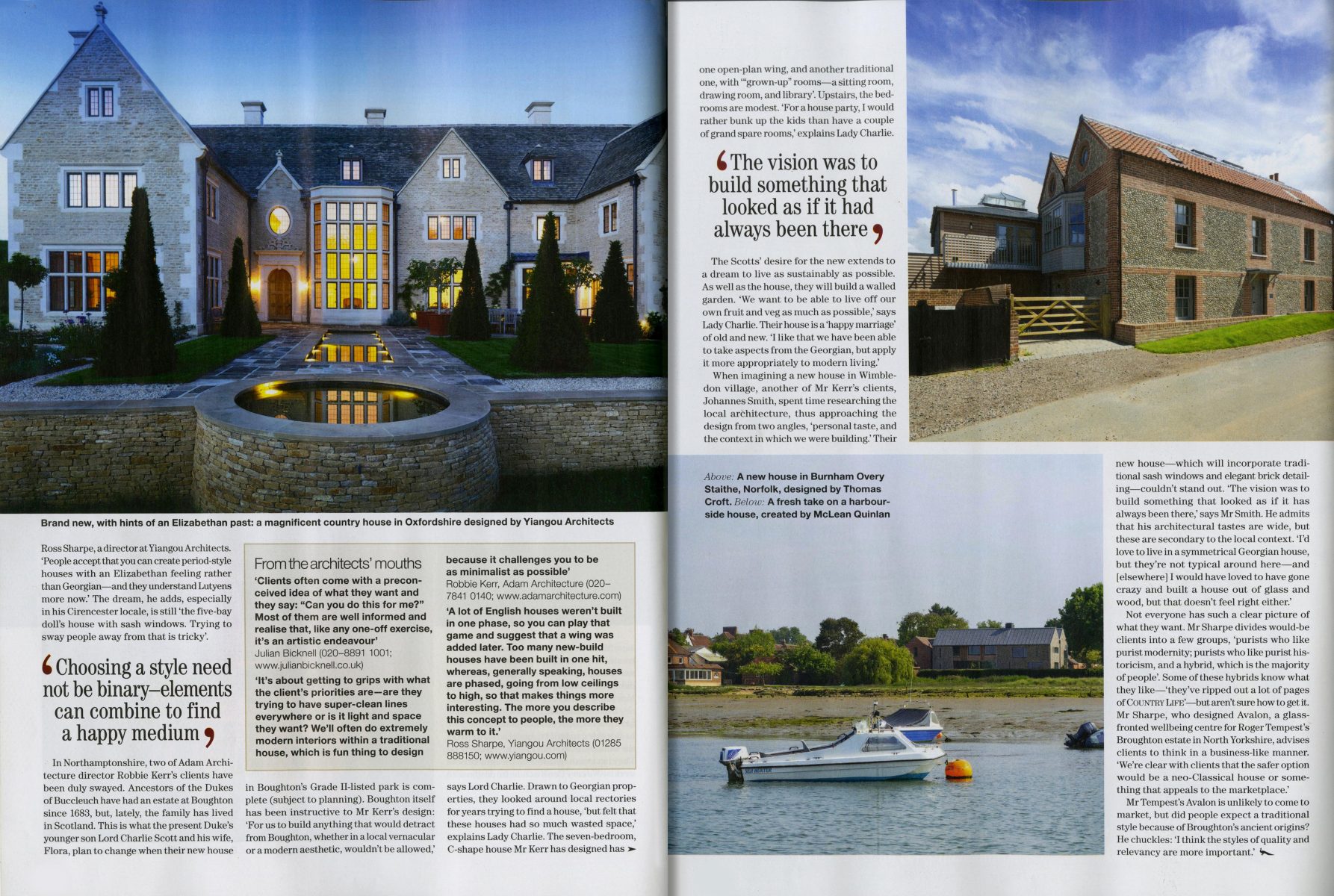 The Scotts' desire for the new extends to a dream to live as sustainably as possible. As well as the house, they will build a walled garden. 'We want to be able to live off our own fruit and veg as much as possible,' says Lady Charlie. Their house is a 'happy marriage' of old and new. 'I like that we have been able to take aspects from the Georgian, but apply it more appropriately to modern living.’

'When imagining a new house in Wimbledon village, another of Mr Kerr's clients, Johannes Smith, spent time researching the local architecture, thus approaching the design from two angles, 'personal taste, and the context in which we were building.’ Their new house-which will incorporate traditional sash windows and elegant trick detailing-couldn't stand out. 'The vision was to build something that looked as if it has always been there,' says Mr Smith. He admits that his architectural tastes are wide, but these are secondary to the local context. 'I'd love to live in a symmetrical Georgian house, but they're not typical around here-and [elsewhere] I would have loved to have gone crazy and built a house out of glass and wood, but that doesn't feel right either.'

Not everyone has such a clear picture of what they want. Mr Sharpe divides would-be clients into a few groups, 'purists who like purist modernity; purists who like purist historicism, and a hybrid, which is the majority of people'. Some of these hybrids know what they like-'they've ripped out a lot of pages of COUNTRY LIFE'-but aren't sure how to get it. Mr Sharpe, who designed Avalon, a glass fronted well-being centre for Roger Tempest's Broughton estate in North Yorkshire, advises clients to think in a business-like manner. 'We're clear with clients that the safer option would be a neo-Classical house or something that appeals to the marketplace.'

Mr Tempest's Avalon is unlikely to come to market, but did people expect a traditional style because of Broughton's ancient origins? He chuckles: 'I think the styles of quality and relevancy are more important.'

From The Architects' Mouths

'It's about getting to grips with what the client's priorities are - are they trying to have super-clean lines everywhere or is it light and space they want? We'll often do extremely modern interiors within a traditional house, which is a fun thing to design because it challenges you to be as minimalist as possible' Robbie Kerr, ADAM Architecture (020-7841 0140; www.adamarchitecture.com)

Here is the house Robbie mentions in the article. 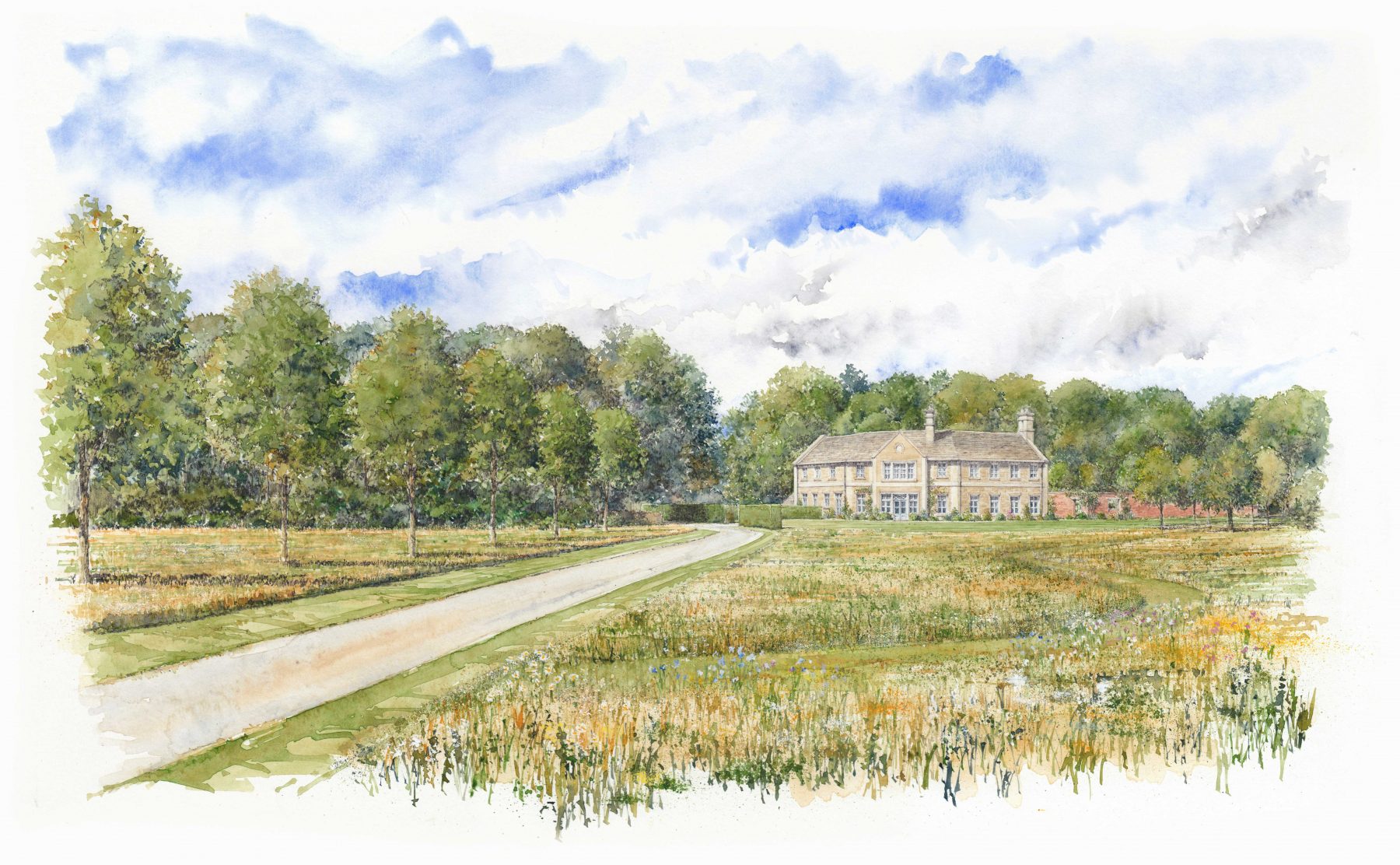