As part of a joint collaboration between the Master Carver’s Association and the Grinling Gibbons Society, a national exhibition celebrating the tercentenary and Gibbons’ life, genius, and legacy is being hosted at Bonhams, 101 New Bond Street, in London, until 27th August 2021.

In addition to the exhibition, a competition has been underway since the beginning of March to find the best emerging wood and stone carvers across the UK. On opening night of the tercentenary, 3rd August, the winners of The Grinling Gibbons Tercentenary Awards were announced. First prize in stone went to Freya Morris for ‘Line of Defence’ and first prize in wood was awarded to Jo Grogan for ‘Gorgoneion’.  Both winners get £1,000 and place at the annual Prince’s Foundation Summer School in 2022.

Hugh Petter on behalf of all the judges said, “The judges were delighted by the range and quantity of work submitted, especially as the competition was held during the pandemic.  It was really encouraging to see a new generation of accomplished carvers emerging with the technical skills and imagination to keep the spirit of Grinling Gibbons fresh and alive in the 21st Century.” 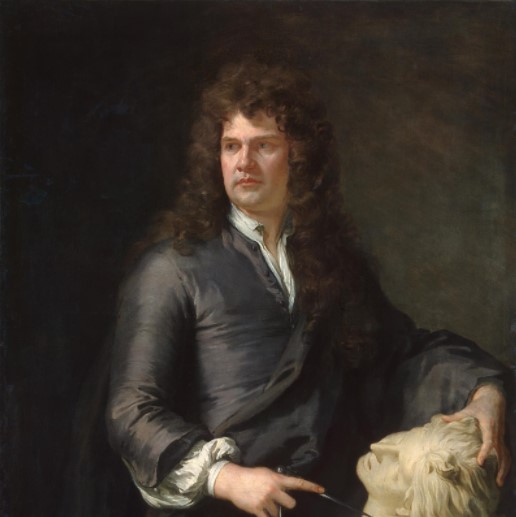 Grinling Gibbons, legendary artist, sculptor, craftsman, and the greatest carver in British history died on 3 August 1721.  His exceptional works in wood and stone can be found in museums, galleries, churches, and private houses throughout the UK.  Over the past 300 years he has inspired craftsmanship and carving from his contemporaries to modern-day makers. 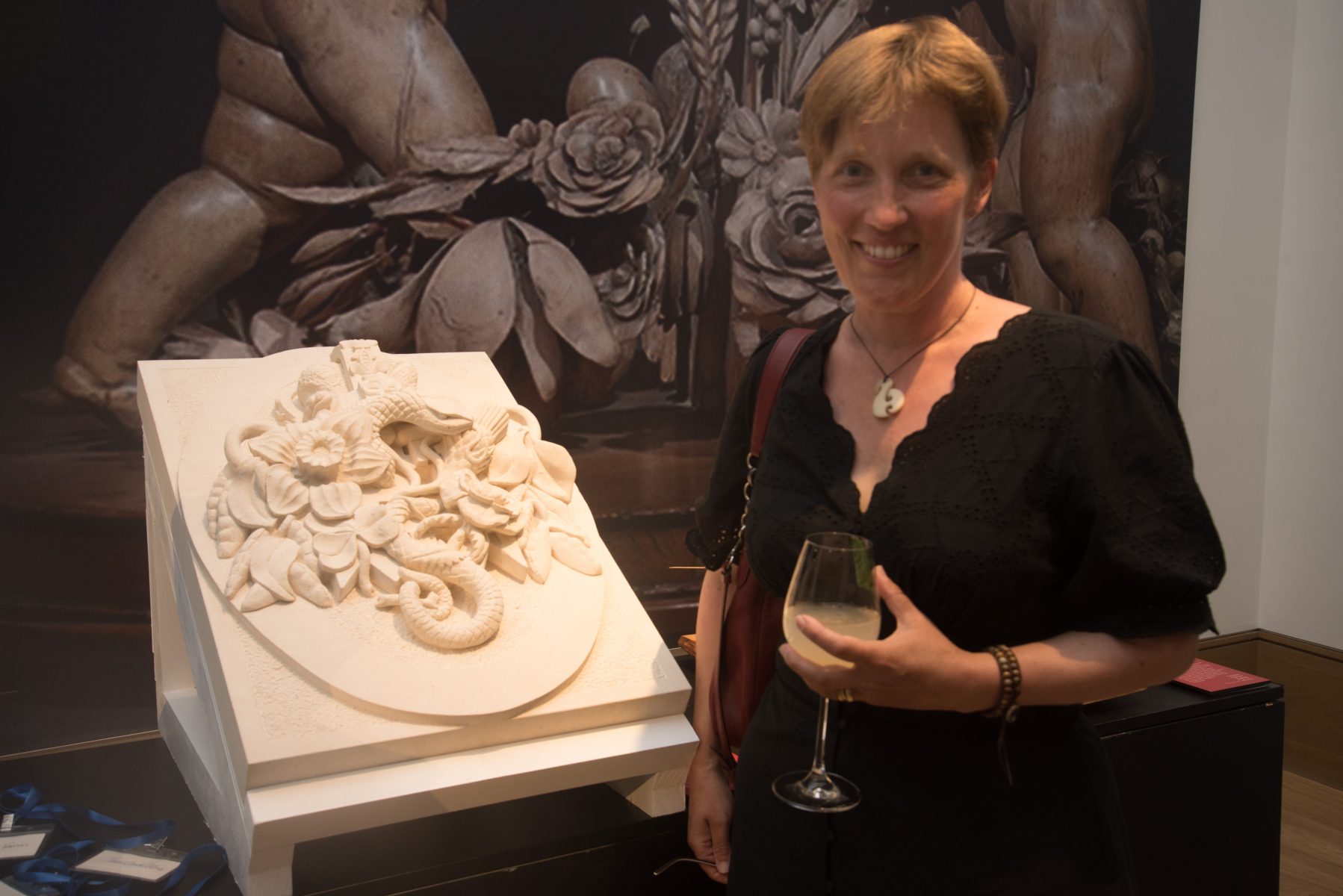 “This piece aims to evoke the exuberant and complex character of Gibbons’ sculpture, whilst expressing a contemporary political message. The Crown Portcullis is the emblem of Parliament and the Rod of Asclepius is a symbol of the medical profession. The rose, clover, daffodil and thistle represent the four nations and reflect Gibbon’s use of plants in his compositions. The chains of the Portcullis are replaced with closed peapods and keys, a reference to keyworkers. Supposedly Gibbons included closed peapods when he had not been paid, and open peapods denote the reverse. I want this piece to reflect my concern at allegations that some close to Government may have profited from the Covid 19 pandemic, while key workers throughout the British Isles have not been financially recompensed for their extraordinary work.” - Freya Morris 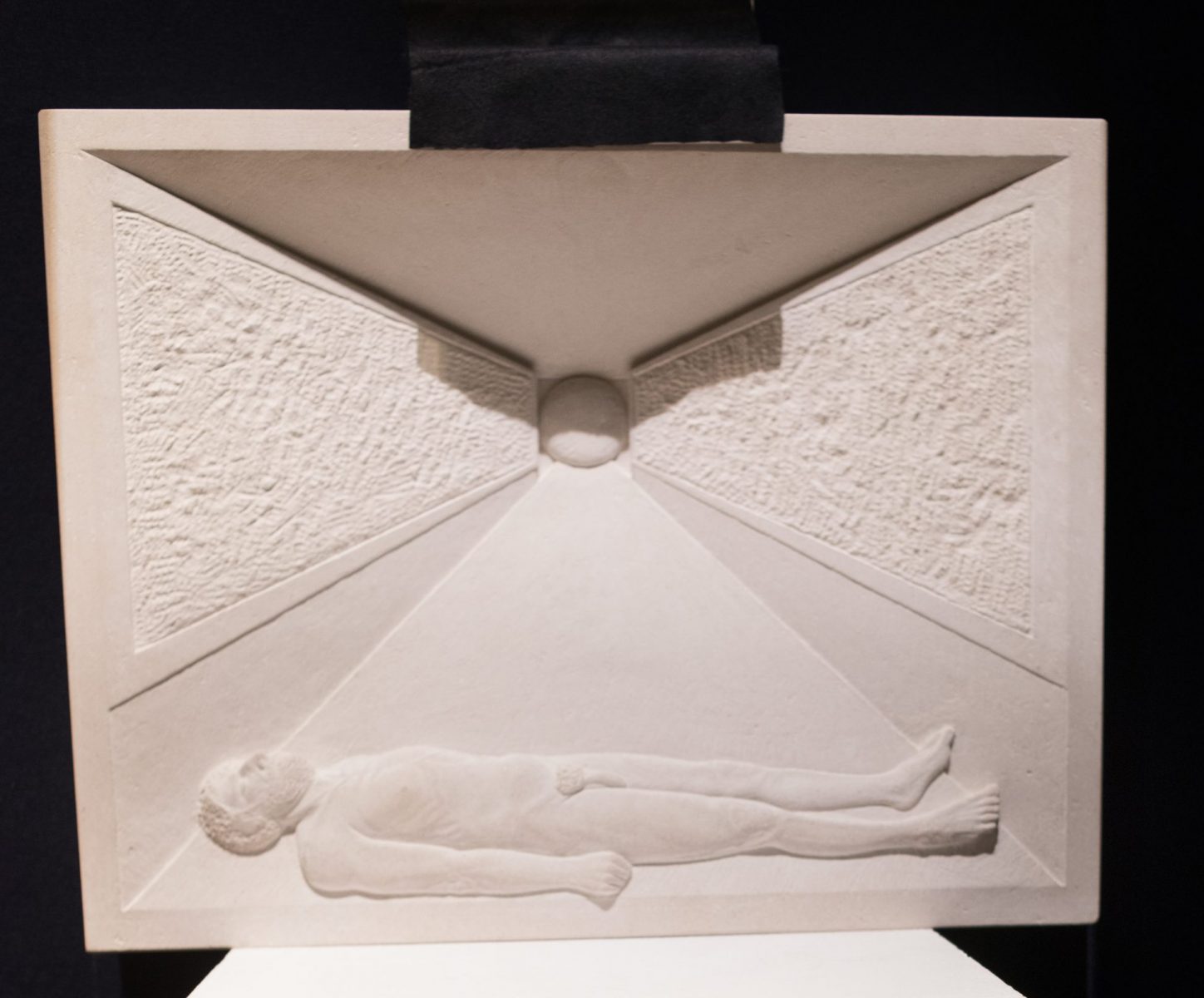 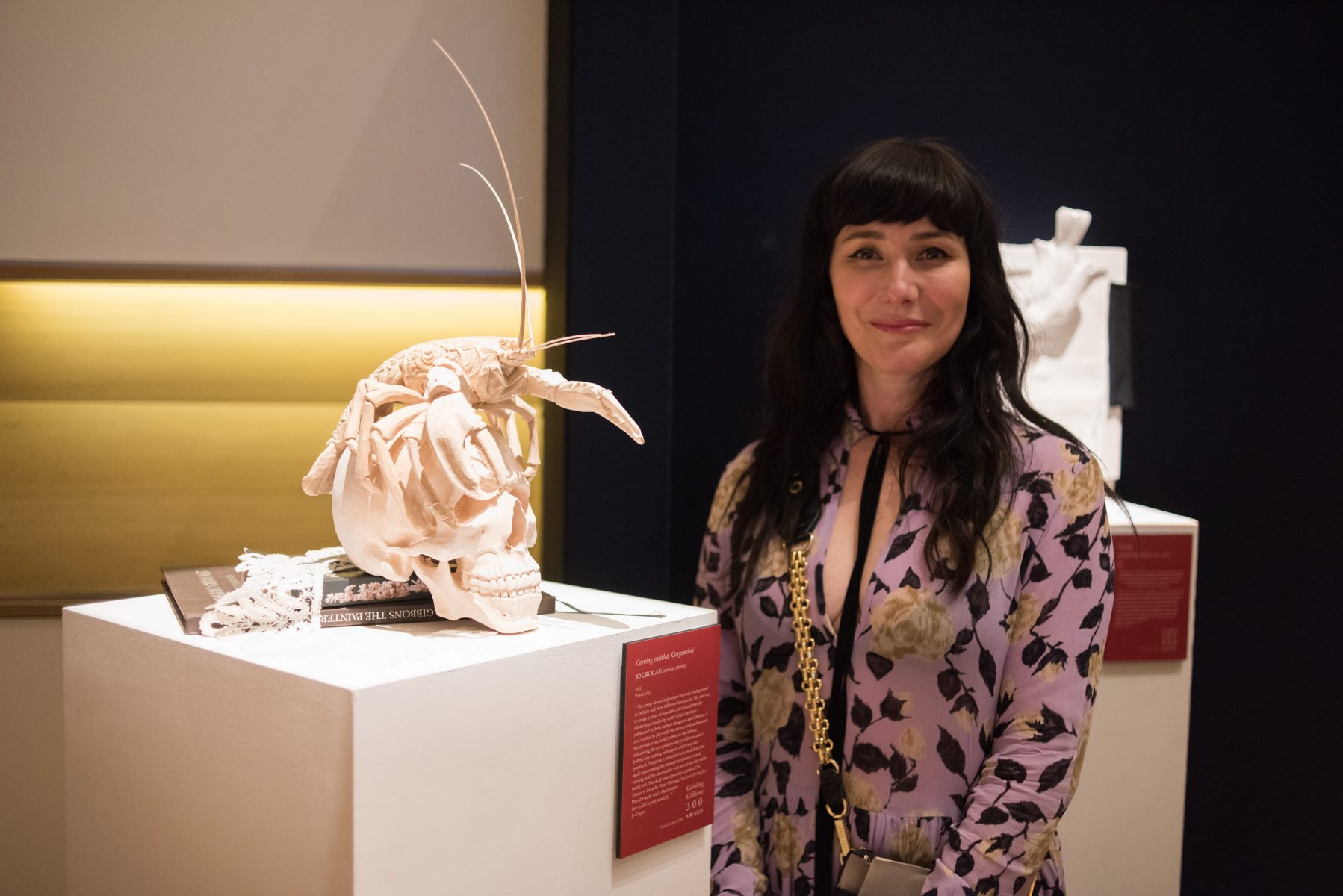 “This piece draws inspiration from my background in fashion and from Gibbon's lace cravat. My aim was to create a piece of wearable art. I found that the lobster was a unifying motif which has been referenced by both fashion designers and Gibbons. I also wanted to play with the texture and surface and incorporate a lace relief pattern to the lobster, referencing the gros point work by Gibbons and bobbin lace making techniques which my Nan practiced. The piece is mounted on a modelled clay skull representing the precarious future of wood carving and the uncertainty over wood carving skills being lost. The skull rests upon my copies of The Painter in Wood by Peter Thuring; The Lost Carving by David Esterley and a Dutch-style lace collar made by my Nan Lily.” - Jo Grogan 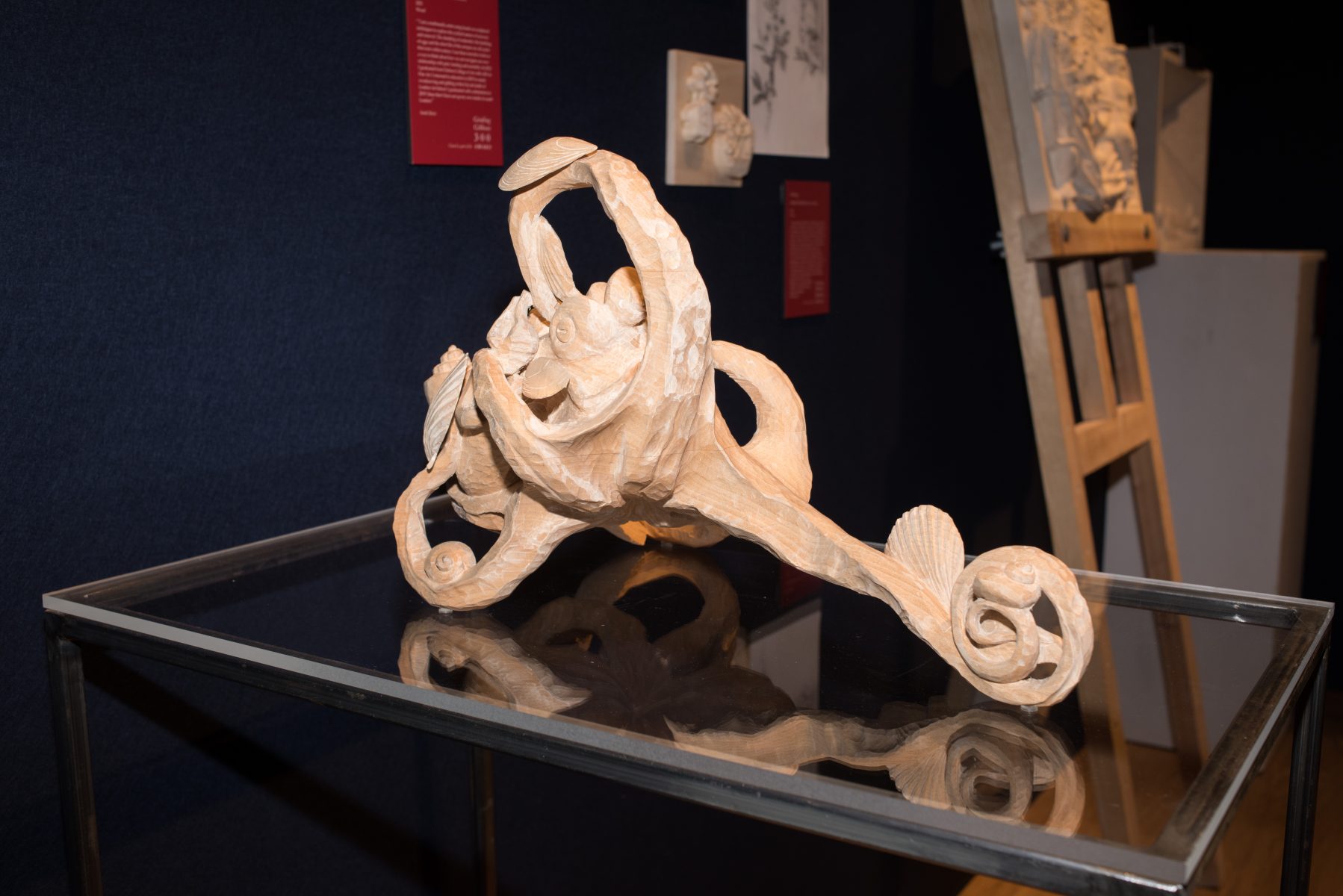 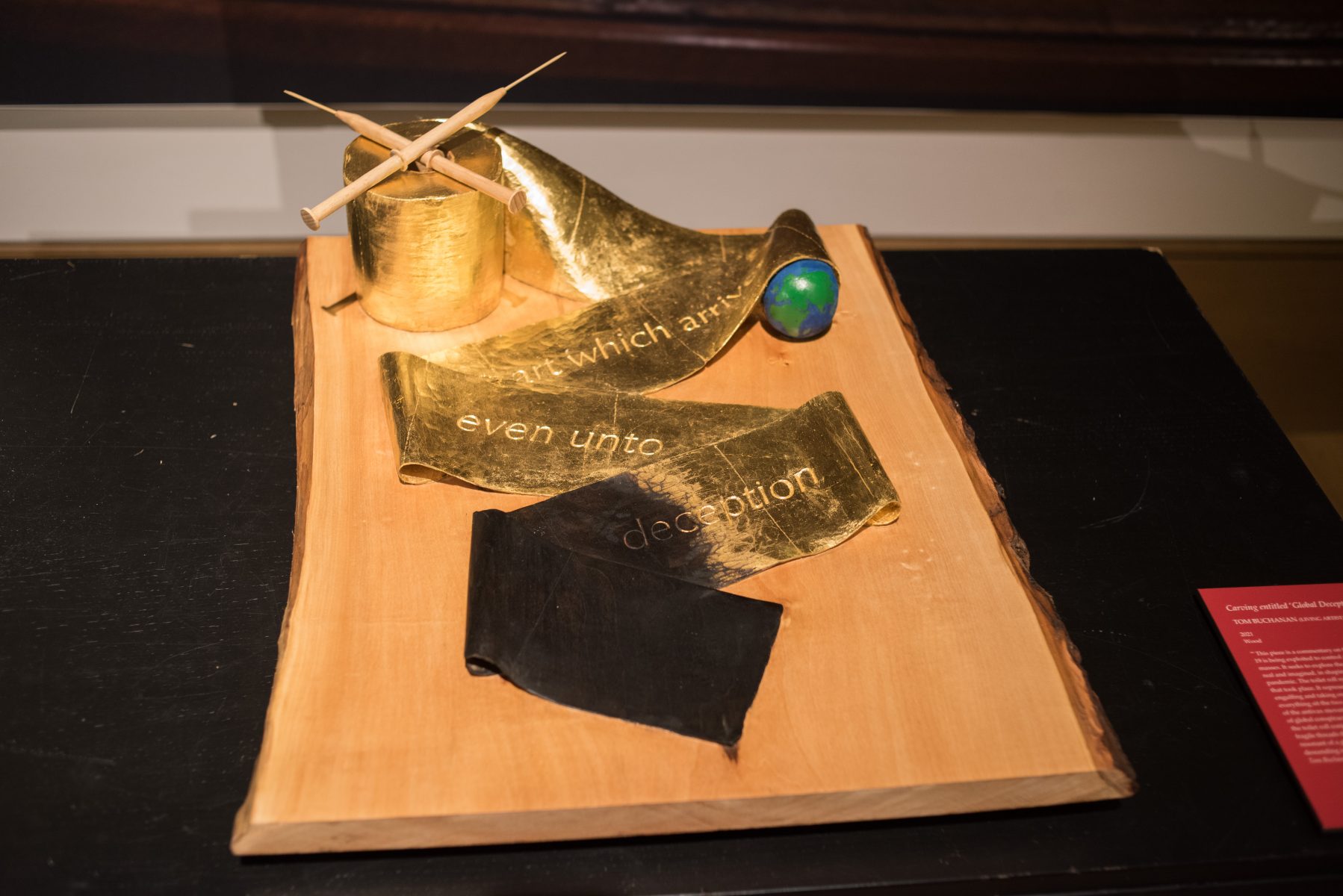