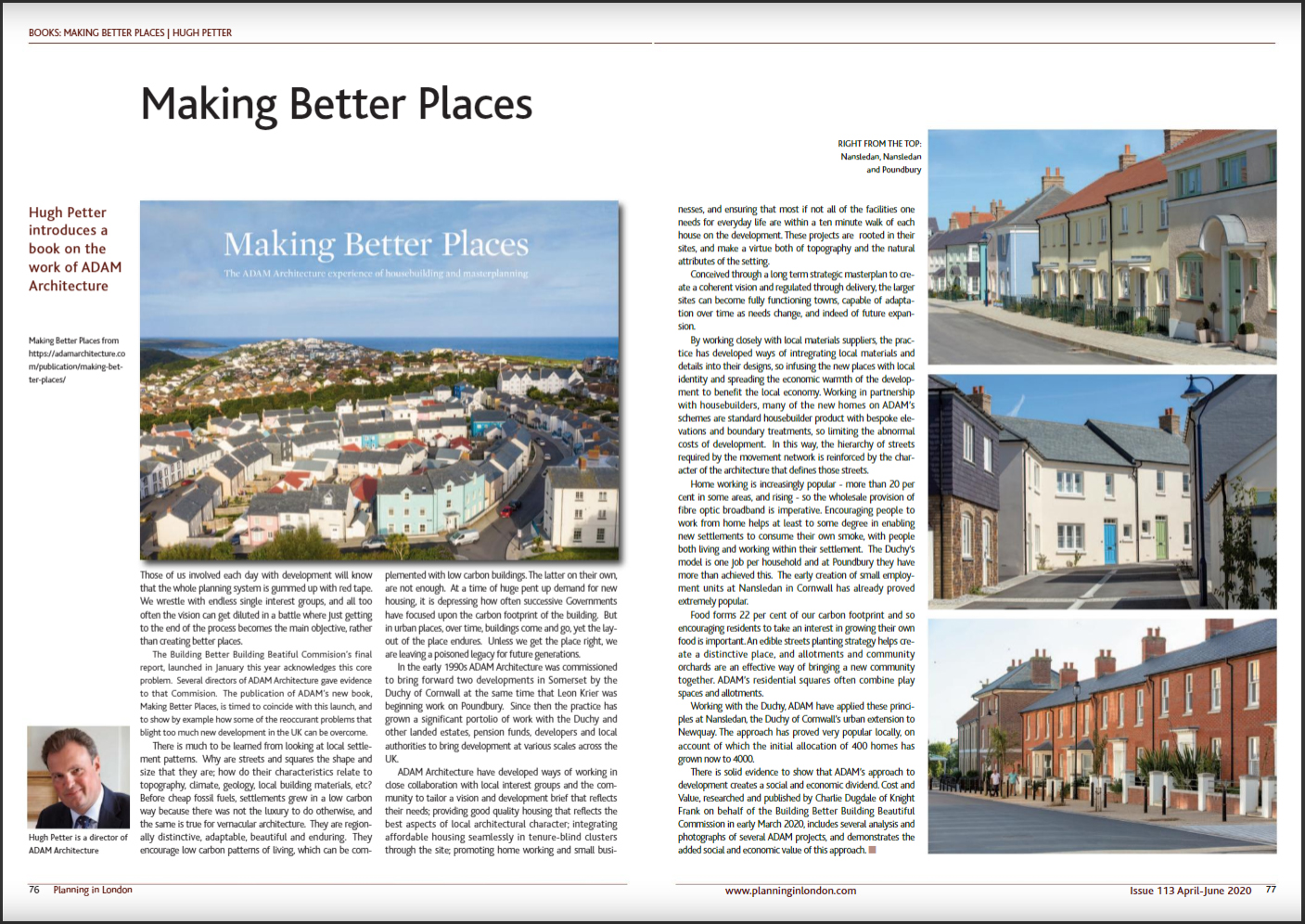 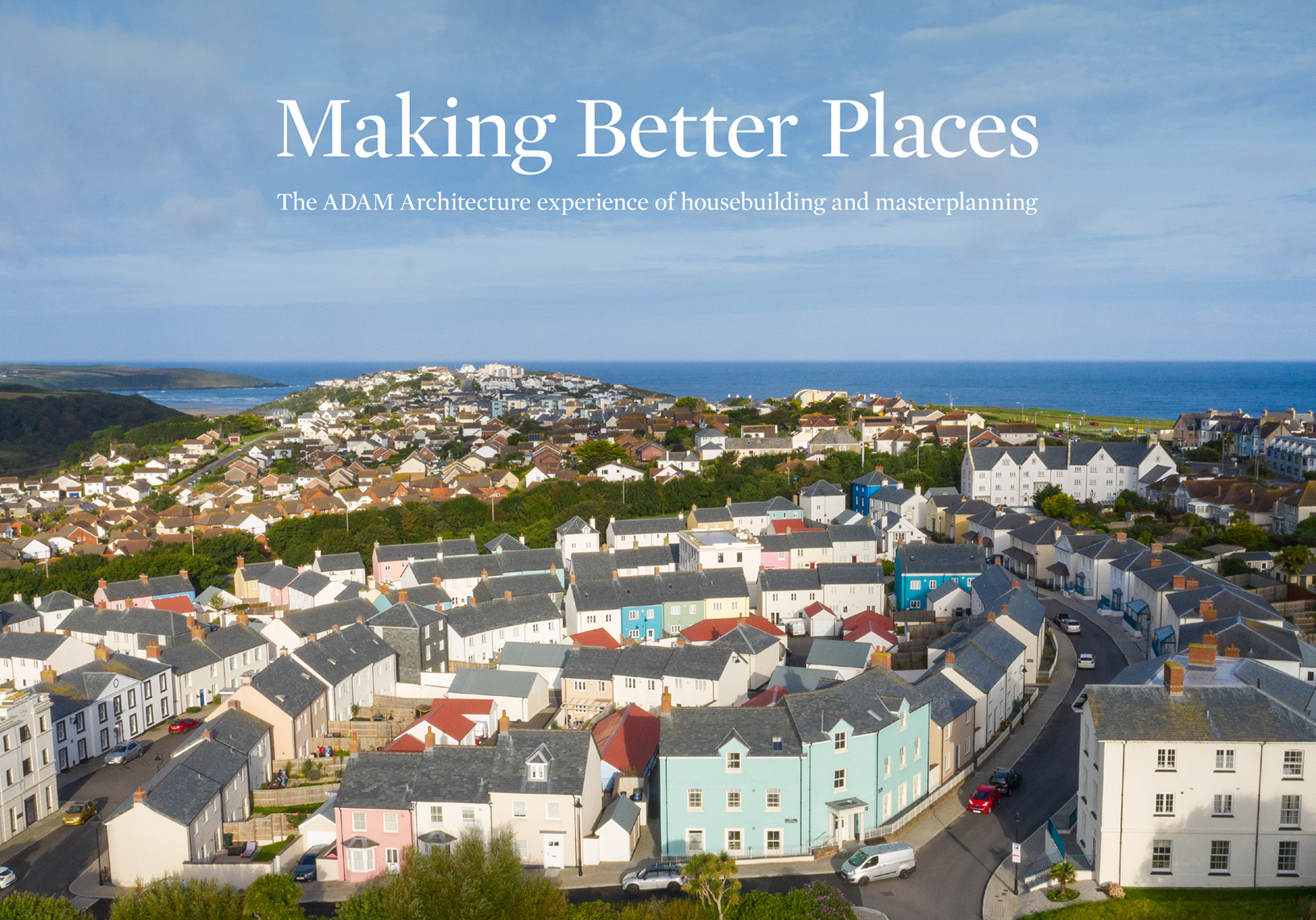 Those of us involved each day with development will know that the whole planning system is gummed up with red tape.  We wrestle with endless single interest groups, and all too often the vision can get diluted in a battle where just getting to the end of the process becomes the main objective, rather than creating better places.  The Building Better Building Beautiful Commission’s final report, launched in January this year acknowledges this core problem.  Several directors of ADAM Architecture gave evidence to that Commission.  The publication of ADAM’s new book, Making Better Places, is timed to coincide with this launch, and to show by example how some of the recurrent problems that blight too much new development in the UK can be overcome.

There is much to be learned from looking at local settlement patterns.  Why are streets and squares the shape and size that they are; how do their characteristics relate to topography, climate, geology, local building materials, etc?  Before cheap fossil fuels, settlements grew in a low carbon way because there was not the luxury to do otherwise, and the same is true for vernacular architecture.  They are regionally distinctive, adaptable, beautiful and enduring.  They encourage low carbon patterns of living, which can be complemented with low carbon buildings. The latter on their own, are not enough.  At a time of huge pent up demand for new housing, it is depressing how often successive Governments have focused upon the carbon footprint of the building.  But in urban places, over time, buildings come and go, yet the layout of the place endures.  Unless we get the place right, we are leaving a poisoned legacy for future generations.

In the early 1990s ADAM Architecture was commissioned to bring forward two developments in Somerset by the Duchy of Cornwall at the same time that Leon Krier was beginning work on Poundbury.  Since then the practice has grown a significant portfolio of work with the Duchy and other landed estates, pension funds, developers and local authorities to bring development at various scales across the UK.

ADAM Architecture have developed ways of working in close collaboration with local interest groups and the community to tailor a vision and development brief that reflects their needs; providing good quality housing that reflects the best aspects of local architectural character; integrating affordable housing seamlessly in tenure-blind clusters through the site; promoting home working and small businesses, and ensuring that most if not all of the facilities one needs for everyday life are within a ten minute walk of each house on the development. These projects are rooted in their sites, and make a virtue both of topography and the natural attributes of the setting.

Conceived through a long term strategic masterplan to create a coherent vision and regulated through delivery, the larger sites can become fully functioning towns, capable of adaptation over time as needs change, and indeed of future expansion.

By working closely with local materials suppliers, the practice has developed ways of integrating local materials and details into their designs, so infusing the new places with local identity and spreading the economic warmth of the development to benefit the local economy.  Working in partnership with housebuilders, many of the new homes on ADAM’s schemes are standard housebuilder product with bespoke elevations and boundary treatments, so limiting the abnormal costs of development.  In this way, the hierarchy of streets required by the movement network is reinforced by the character of the architecture that defines those streets.

Home working is increasingly popular – more than 20% in some areas, and rising – so the wholesale provision of fibre optic broadband is imperative.  Encouraging people to work from home helps at least to some degree in enabling new settlements to consume their own smoke, with people both living and working within their settlement.  The Duchy’s model is 1 job per household and at Poundbury they have more than achieved this.  The early creation of small employment units at Nansledan in Cornwall has already proved extremely popular.

Food forms 22% of our carbon footprint and so encouraging residents to take an interest in growing their own food is important.  An edible streets planting strategy helps create a distinctive place, and allotments and community orchards are an effective way of bringing a new community together.  ADAM’s residential squares often combine play spaces and allotments.

Working with the Duchy, ADAM have applied these principles at Nansledan, the Duchy of Cornwall’s urban extension to Newquay.  The approach has proved very popular locally, on account of which the initial allocation of 400 homes has grown now to 4000.

There is solid evidence to show that ADAM’s approach to development creates a social and economic dividend.  Cost and Value, researched and published by Charlie Dugdale of Knight Frank on behalf of the Building Better Building Beautiful Commission in early March 2020, includes several analysis and photographs of several ADAM projects, and demonstrates the added social and economic value of this approach.

View a pdf copy of the article from Planning in London