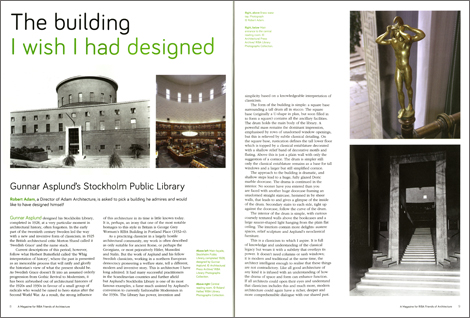 The building I wish I designed – RIBA Friends of Architecture magazine, March 2015

Robert Adam is asked to pick a building he admires and would like to have designed himself. He picks Gunnar Asplund’s Stockhold Public Library.

Gunnar Asplund designed his Stockholm Library, completed in 1928, at a very particular moment in architectural history, often forgotten. In the early part of the twentieth century Sweden led the way with a new and inventive form of classicism; in 1925 the British architectural critic Morton Shand called it ‘Sweedish Grace’ and the name stuck.